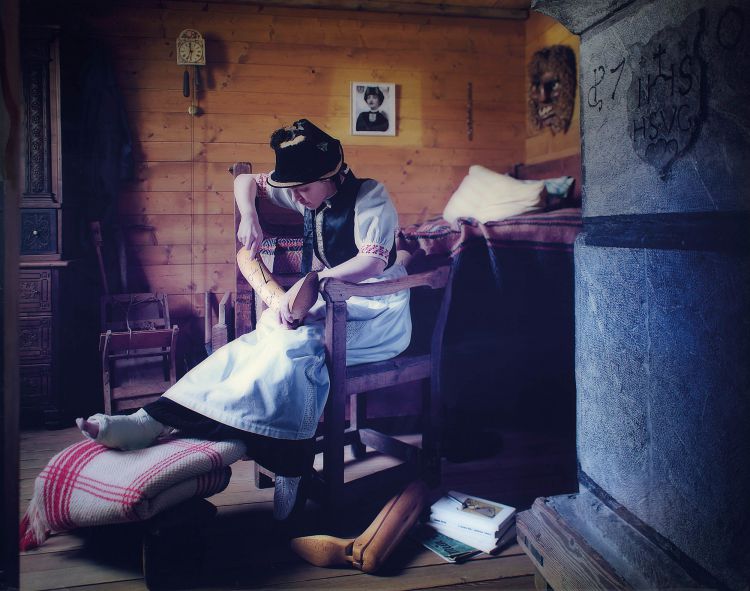 Bridget Baker
South African 1971-
The Transparent Girl in Kippel
signed, dated 2006 and numbered 1/8 on the reverse and bears a João Ferreira Gallery label adhered to the reverse
lambda print and diasec at Grieger, Dusseldorf, Germany
180 by 226.5cm excluding frame


Bridget Baker’s energetic practice from the early 2000s encompassed sculpture, installation, participatory performances and photography. Her skilfully executed work explored themes of craft, labour, gender and publicity; this lot is emblematic. In the early 2000s, Baker worked as a stylist in the film industry and shortly adopted its methods and aesthetic in her own practice. This lot forms part of a series of highly choreographed photographic stills featuring various female avatars – Sunday Morning Wonder Woman, Blue Collar Girl, Maiden and Transparent Girl – representative of the “sensible woman”. Working nomadically, Baker would improvise wherever she found herself, sourcing her collaborators and props locally – in Cape Town, Delhi, Ghent, Maputo.1

Daniel Stucki photographed this lot in the Lötschental Costume Museum in Valais, Switzerland, with Baker performing the titular role of the Transparent Girl. The set design includes a traditional mask worn by Swiss men during an annual ritual to frighten young, eligible maidens, a symbol of masculine power that the Transparent Girl performs her feminine labour – inscribing, into a wooden leg, Baker’s trademark phrase: “Only You Can?”2 The black-and-white headshot on the rear wall portrays a fictitious Hollywood starlet and was taken by Pieter Hugo. Artist Donna Kukama also provided assistance on set.

1. Kathryn Smith (2006) ‘Grass Grows from the Middle’, in But being a sensible woman, she subdued her terrors and turned over and went to sleep again, Cape Town: Bell Roberts Print and Publishing. Unpaginated. 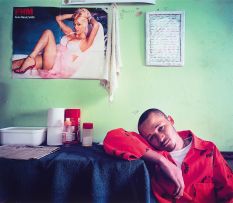