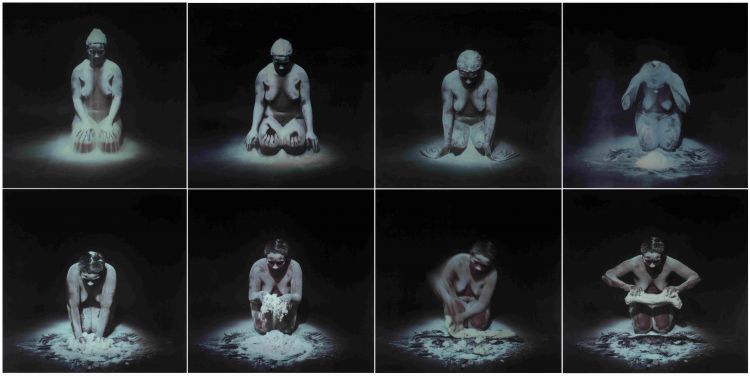 As the 2003 Standard Bank Young Artist for Visual Art, Searle’s early, career-defining work explores the ways in which history and geography map onto the human body. The origin of this line of inquiry is perhaps most evident in Snow White, which was originally conceived as a video work for the show Authentic/Ex-centric curated by Salah Hassan and Olu Oguibe at the Venice Bienniale in 2001.

The current lot, Still, is a series of eight semi-transparent photographs from Snow White, presented in sequence. “These depict the artist kneeling, covered in flour, in the process of kneading dough. The installation is illuminated by a central light source, and a thin layer of flour on the floor mirrors the images, showing traces of a body. The white flour on Searle’s skin sharpens one’s awareness of skin colour, while the labour of preparing dough highlights gender – both loaded subjects in South Africa’s fraught history. In the end, the ritualistic nature of the action offers a space for reflection and, perhaps, even healing”.1

“This is one of the earliest works that I made almost 17 years ago” Searle recollects. “It’s part of a body of work called the ‘Colour Me’ series, in which I covered myself with spices or flour. It’s evocative of a way of working flour and water that imitates the way I would make roti. It references the experience of making this that has been passed down through the generations”.2

Searle believes that to transpose concepts such as feminism and civil rights from one cultural context to another can be fraught with difficulty. In this context, she says, the work and its presentation is a reclaiming of her history and heritage.3

49th Venice Biennale, Authentic/Ex-centric: Africa In and Out of Africa, 2001.

Another example from this edition was exhibited at:

Davis Museum at Wellesley College, Wellesley, The Space Between, March 18 to June 8 2003.

Barbara Pollack, 'THE NEW LOOK OF FEMINISM: Using everything from stitchery to baking flour, women around the world are lashing out at all kinds of extremism - even strident feminism', ARTnews, September 2001, page 132. 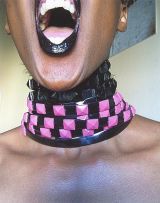 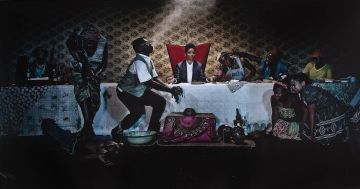