the outset cornice above a frieze drawer with a pair of doors below, enclosing an arrangement of four open compartments and small drawers flanking a central arched cupboard with further drawers below, the stand with a frieze drawer, on cabriole legs and hoof feet joined by an X-shaped stretcher, engraved throughout with architectural panels and buildings outlined with borders of flowers and foliage, restorations, some ivory losses, cracking, 140,5cm high, 81cm wide, 41cm deep

Vizagapatam is situated on the South-East coast of India midway between the large cities of Calcutta and Madras. Blessed with a fine natural harbour, it was an ideal spot for the British East India Company to open a trading station in 1668. Its importance as a trading hub between Europe and the Far East was enhanced by the easy access to the rich resources of the hinterland provided by the Godava river.

As European settlement grew in the 18th century, so did the demand for locally made furniture, and Vizagapatam developed into an important centre of furniture-making. This growth was helped by the presence of indigenous timbers like teak, ebony and rosewood and the ready availability of ivory, padouk and sandalwood. The style that developed is highly distinctive and remarkable for the harmonious way in which Western and Eastern forms come together. Whilst the design of the pieces clearly owes much to European models, which were often based on Dutch or English examples illustrated in contemporary pattern books, the decoration, especially in the earlier examples, is heavily infl uenced by Indian forms.

Typically the rich local woods were inlaid or veneered with ivory engraved with black lac to create incredibly ornate decorative work. This effect was one that had great appeal, with the visiting Major John Corneille (in the first recorded reference to Vizagapatam furniture) writing in 1756 ‘that the place is likewise remarkable for its inlay work, and justly, for they do it to the greatest perfection’.¹

The engraving detail found on this example depicts architecture copied from European prints surrounded by bands of exotic foliage and flowers. 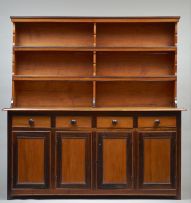 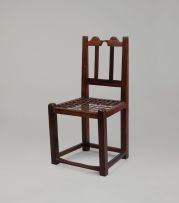 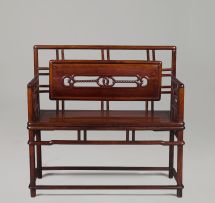 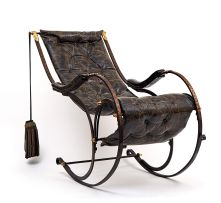 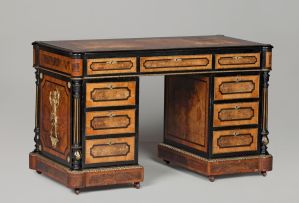