on square-section moulded legs joined by H-stretchers, squab cushion, leather with some distress 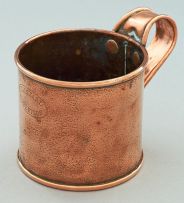