The present lot was presented at the solo show “Remnants” at the Everard Read gallery in Cape Town. The linguistic origin of saman is multiple, and ranges from the idea of a ‘rain tree’, where a liquid like rain is excreted by cicadas, to a Persian noble of the Samanid dynasty.1 It can also be used as an individual’s name, meaning jasmine, calm, and solace, and is also a type of dance termed ‘the dance of a thousand hands’.2

This multiplicity is reflected not only in the multiple images that make up the composite image of the artwork, but in Petersen’s own multiplicity in belonging.

Having left Cape Town aged ten, moving to London with her father – a political exile – learning different art skills in Zimbabwe and South Korea, Petersen came to be inspired by these “feelings of not belonging”.3 Returning to South Africa, she began grappling with the multiple histories that are both personal and of places which she had visited.

Petersen notes that “we carry the remnants of the past with us in our hurt and pain as people with no sense of belonging, these feelings are not exclusive to us. They are felt by displaced communities throughout the world, anyone removed from their indigenous homeland.”4

Using red fabric as an extension of the idea of the colonies, Petersen in her artwork, Saman, calls on ideas around a dance, movements, and prayer in the multiple images that portray slight movements of her hands and arms. The image is powerful through its repetition in form and colour, and its ability to attempt to communicate a word or an idea that is multiple in its meaning.

1. https://www.dictionary.com/browse/saman?s=t. Based on the Random House Unabridged Dictionary. 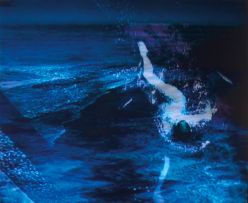 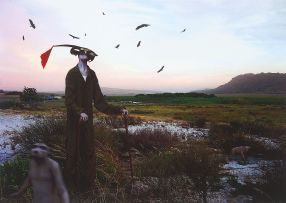