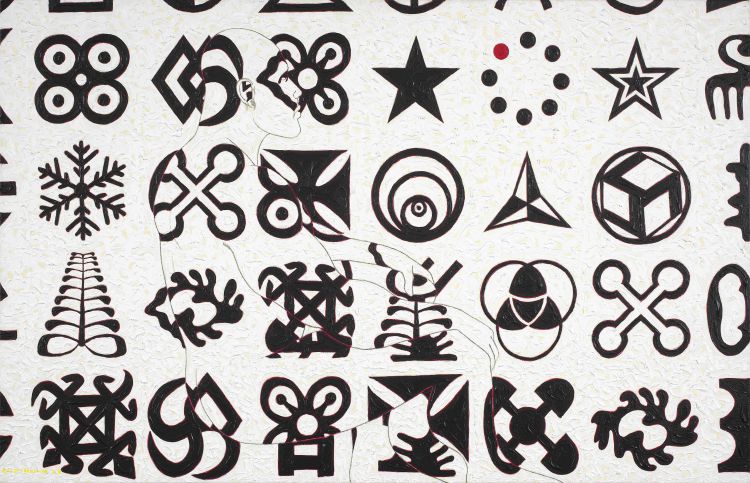 Owusu-Ankomah
Ghanaian 1956-
Thinking the Microcron No 6
signed and dated 2011; signed, dated, inscribed with the medium and dimensions on the reverse and with a Johans Borman Fine Art label adhered to the reverse
acrylic on canvas
85 by 135cm excluding frame


The human figure is central to Owusu-Ankomah’s widely heralded practice. In his earlier work, which drew heavily on masquerade and African rock paintings, these stylised male figures were more clearly visible, but over time have been integrated into a complex fabric of signs that effectively camouflage the figure. As in the work of Conrad Botes, these signs describe an actual and fictional cosmology that defines and contextualises each of Owusu-Ankomah’s figures. The signs are a mix of adinkra symbols (commonly in Ghanaian textile design), Chinese pictographs, consumer logos and invented symbols. The titular microcron, for instance, refers to circles of shining orbs and signifies “universes inside universes”.1

The idealised form of Owusu-Ankomah’s male figures is important too. The artist is an admirer of Michelangelo; his figures have been described as projecting the “divine energy” of the Italian master.2 This is not hyperbole. Curator Shannon Fitzgerald, commenting on the “exaggerated masculinity” of the artist’s figures, notes: “The physicality alludes to labour, which for Owusu-Ankomah is a high moral construct and a noble activity.”3 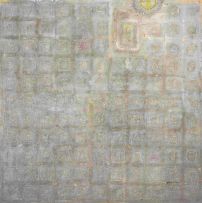 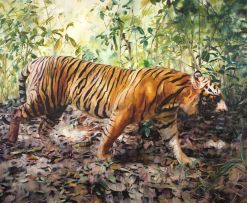 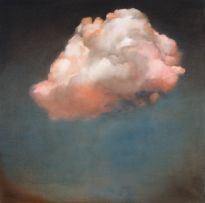