Praying Woman is one of an edition of fifteen that were cast by the Fiorini & Carney Foundry, London in 1966.

At 40,5cm, the work is intimate in scale. Its modest form nevertheless still commands a monumental presence, a feature that epitomizes the artist’s sculpture more generally and on which Cecil Skotnes has commented, “Kumalo has a remarkable sense of form – no matter how big the work, it has a sculpturally monumental feeling.”[i]

Praying Woman is a simplified iconic form. An elongated body transitions into an elegant neck with a small head. Hands, rendered in delicate linear fashion, are crossed over the chest. The elongation of form and the gesture of the hands, coupled with the title, suggest an interest in spirituality and transcendence, but the fuller and more concretely moulded feet, put the figure firmly on the ground and root it to the base.

The beautifully attenuated neck becomes the focal point in much writing on the work. Commenting on a larger version of the sculpture made in 1960 for the Union Pavilion at the Rand Easter Show in Milner Park, Johannesburg, Elizabeth Rankin notes; “The elongated body flows...into the slender neck, on top of which the enlarged head turns upward in supplication.”[ii] Although Rankin's comment relates to the larger version this supplication is also clearly visible in the tilted up head of the current lot.

Praying Woman has considerable delicacy yet retains the physical and symbolic weight of the medium, bronze. This work and works like it exerted a powerful influence on younger sculptors of his day, artists intent on finding an aesthetic that felt rooted in the part of Africa in which they lived. Kumalo's significance is confirmed by Ivor Powell:

'The importance of Kumalo in terms of the developing traditions of South African art can hardly be overstated... he succeeded in finding formulas and registers which, while they drew strongly on African sculptural tradition, nevertheless articulately spoke the languages of international modernism, and demanded to be taken seriously as such.'[iii]

[i] Elza Miles (2004) Polly Street: the story of an art centre, Johannesburg: The Ampersand Foundation . Page71.

cf. Elza Miles. (2004) Polly Street: the story of an art centre, Johannesburg: The Ampersand Foundation. A similar example illustrated in colour on page 71. 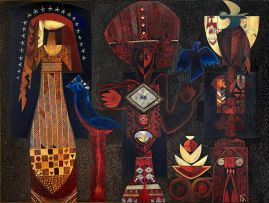 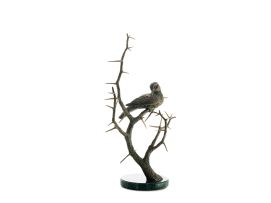 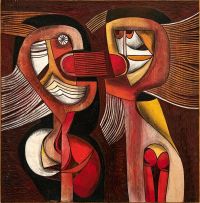