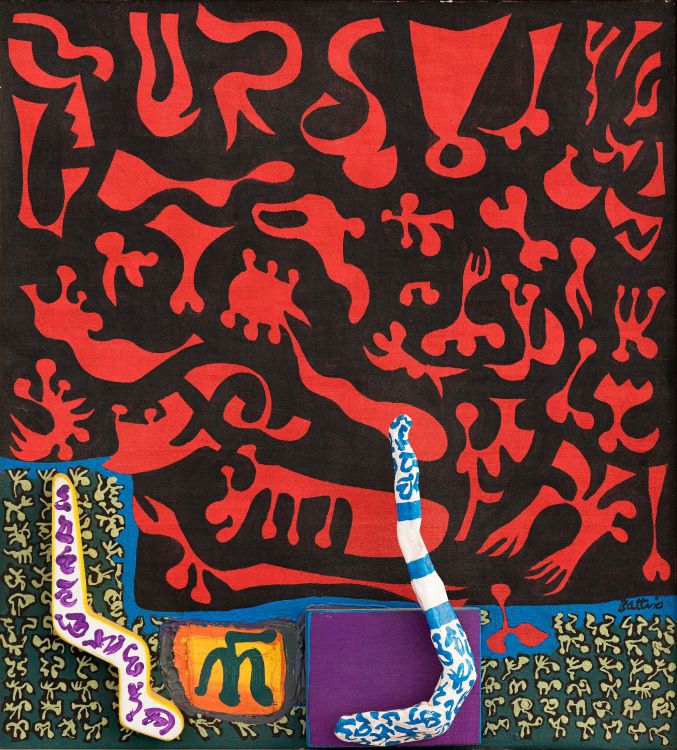 The colourful calligraphic forms in the present lot are inspired by Walter Battiss’s lifelong interest in South African rock art, which he studied intensively from the early 1930s until his death in the early 1980s. Specifically, they refer to the petroglyphs he recorded at the Lower Riet River in the Douglas district of the Northern Cape, symbols he later equated with the letters in the alphabet of a San language and published in his book, The Art of Africa (1958, p50). He used the shapes of these letters, together with those of the letters in Southern Arabic, an area which he visited for the first time in the early 1960s, to devise his own Fook alphabet. Not only do these shapes refer directly to San rock art, but, as Rory Doepel documented in an essay, also to the rock art found in Spain, a form of art that inspired Joan Miro in a profound way.1 The most important part of this panting, however, is the painted wooden parts attached to the picture plane. Few people are aware of the fact that Battiss was keenly interested in wood carving, a practice he took up one holiday after having picked up bits of drift wood from the beach at Leisure Bay, on the KwaZulu coastline near Port Alfred, where the Battiss family had their holiday home for many decades.  The first example of wooden figures on a canvas can be found at the Johannesburg Art Gallery, in a work called Artist’s Hands (1968) onto which Battiss affixed a number of carved wooden birds to every print of the palm of his hand that covers the entire surface of the painting.  The very last work in his studio when he died in 1982 had attached to it many colourfully painted wooden figurines. These wooden pieces lend a sculptural element to the otherwise flat canvas. In a sense they provide an additional dimension to a language.

1 See ‘The Influence of Spanish Rock Art on Miro’s Development’ in Frieda Harmsen (1973) Art and Articles: Festschrift in honour of Heather Martienssen. Cape Town: A. A. Balkema, pp134 – 143. 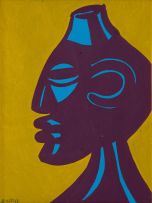 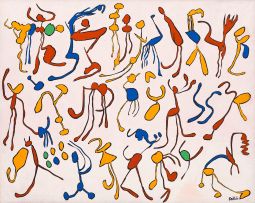 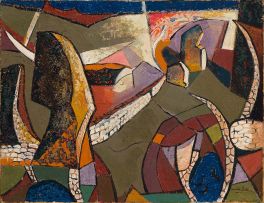