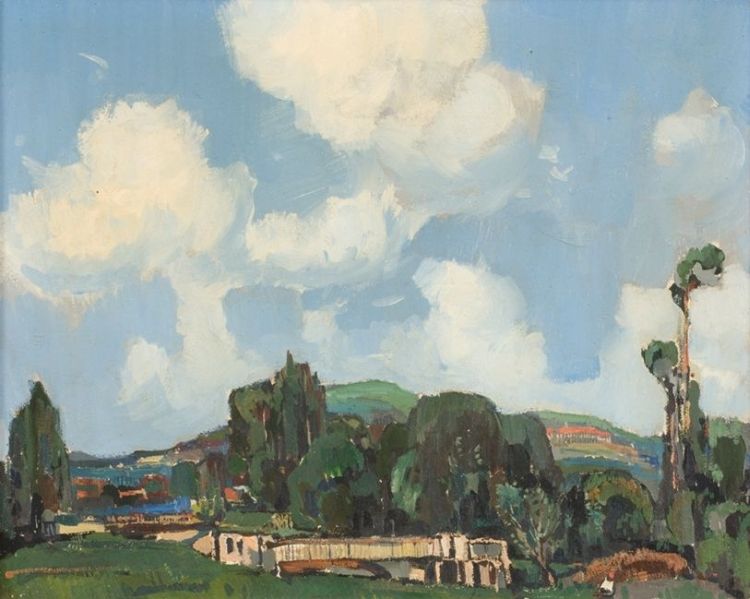 In February 1919 Pieter Wenning instructed the Johannesburg auctioneer Ernest Lezard to auction over thirty of his paintings and drawings. It was then customary for artists to auction a large body of their recent work. Wenning was at the time under financial pressure particularly since his wife required serious surgery. She underwent the operation only to die a few days later on 23rd February.

The sale was not a great success with almost a quarter of the works remaining unsold yet two works, The Apies River and Union Buildings and Landscape Pretoria (this and the following lot), each sold for £15 (R30) reputedly then the highest price ever paid for a painting by Wenning. The paintings were purchased by Gordon Campbell Tomlinson.

Tomlinson was born on the 6th October 1887 one of 13 children. Both attorney and author he took a leading role in the second Afrikaans language movement. Together with Prof. J.J. Smith and Dr. Tobie Muller they published the periodical Ons Moedertaal which later merged with Die Huisgenoot. At the time that he purchased these paintings he practised as an attorney at Vredefort where he spent the greater part of his life.

Shortly after acquiring the paintings, Tomlinson arranged a small local exhibition of his collection and presented a lecture. He wrote to Wenning, J.E.A. Volschenk and Hugo Naudé asking for their approach to and philosophy of art and also their aims. All three replied at some length. Their replies are reproduced in an article on the Tomlinson collection published in Die Huisgenoot of 25 June 1954 by Prof. G. Dekker. Sadly a part of the Wenning reply had been mislaid. Wennings reply is also reproduced in the catalogue for the retrospective exhibition presented by the Pretoria Art Museum in March 1967. Both paintings are now being sold by Tomlinson descendants.

In this remarkable painting of Pretoria in the early twentieth century, Pieter Wenning captures an image of a fertile place, populated with trees and lush undergrowth alongside the Apies River as it flows north through the city. Above this landscape, a bright blue sky optimistically takes up almost two thirds of the composition.

The cornerstone was laid in late 1910 and the building completed in 1913 just a few years before Wenning painted this scene. The Union Buildings feature in other works such as the pencil and wash drawing entitled Die Uniegebou, Pretoria which was amongst the works that the artist consigned to D. C. Boonzaier in March 1916 for sale. In correspondence between them dating from 27 March to 11 May 1916 they discussed the works and Boonzaier noted in a diary entry of 14 May 1916: “This is one of the most charming things Wenning has done”.ii

While Wenning was working daily in De Bussy’s Bookshop he used every available free Wednesday afternoon and Sundays to go out painting. It often took him about an hour to cycle out to his chosen sites where he would work furiously, sometimes till after sunset, before packing up and cycling back into town. At one stage he acquired a tent, the better to be able to immerse himself in the landscape and study its features.

His landscapes show evidence of careful observation from nature, yet the painterly quality remains paramount. With broad brushstrokes loaded with a range of blues and greens, he captures the vista over Pretoria with a vision that is fresh and assured. 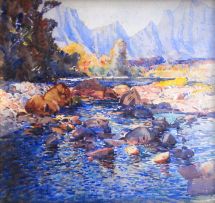 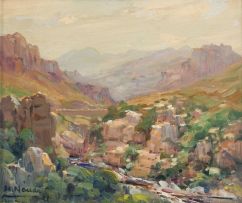 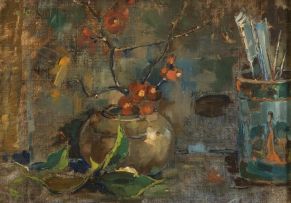 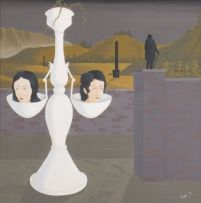 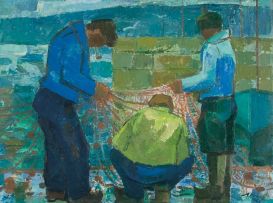