Born in Pretoria, Jacob Hendrik Pierneef was the son of Dutch immigrants whose circle of friends included Anton van Wouw, Frans Oerder and Pieter Wenning, each of whom offered the young artist sound advice and encouragment in his artistic pursuits.

When the second Anglo-Boer War broke out in 1899, the family chose deportation to the Netherlands where the young Pierneef’s studies and exposure to the old masters there and in Rome were to have a formative influence on his development. In 1900 he studied drawing under an architect in Hilversum and in 1901 attended the Rotterdam Academy. Back in South Africa, the gifted painter, Frans Oerder, taught him for several years and he learnt etching and wood-engraving under George Smithard.

Returning to Europe in 1925, he was exposed to many stimuli but it was Dutch artist and theorist, Willem van Konijnenburg (1868-1943), who was to have the most seminal influence on Pierneef’s art and thinking through his philosophy regarding the spiritual effects of mathematical proportion, linear rhythm and simplified form. Accordingly, principles of geometry that stress precision through the emphasis of linear elements in painting are employed to achieve harmony, balance and unity.

While the Impressionists’ and Post-Impressionists’ colour palette and treatment of light effects also impressed him, Pierneef found in Van Konijnenburg’s ideas the approach that was to become the foundation for his mature style, of which this painting is an excellent example.

The composition is dominated by the majestic grandeur of the baobab tree whose soaring verticality suggests power, dignity and oneness. The intersecting arcs of the spreading branches and the sweeping, white clouds focus attention on the apex of the tree. In addition, the curving lines of the road and the dynamic diagonals of the trees, arranged in diminishing perspective, concentrate interest on the extraordinary bulk of the baobab’s trunk.

Trees are significant in Pierneef’s oeuvre. Not only are specific trees characteristic of particular geographic areas which they assist in describing, but they are emblematic of his art where trees are both an active defining principle used to structure the composition and the key elements in conveying symbolic information.

Pierneef painted the trees in this bushveld scene with such devoted attention to detail that they are clearly recognisable. The large baobab (Adansonia digitata) in the centre is flanked by umbrella trees, or ‘haak en steek’ (Acacia tortilis). The tree with the green crown and whitish bark is known as the Sheppard tree (Boschia albitrunca), while the tree on the far right is probably the ‘bergkaree’ (Rhus leptodictya) with its characteristically bent branches. The tall tree in the right foreground, with its erect growth, appears to be a ‘boekenhout’ (Faurea saligna). Typical bushveld trees in the background include the bushwillow (Combretum species), thorn trees (Acacia species) and probably the tree wisteria (Bolusanthus speciosus).

In his influential book on the Johannesburg Station Panels, Nic Coetzee points out that trees have a special place in the work of Pierneef in general ...

The tree is a potent and complex symboli : ‘the symbolism of the tree denotes the life of the cosmos: its consistence, growth, proliferation, generative and regenerative processes.’ii This would fit in with the pantheistic view of Nature as a vast process of becoming, and the outer forms of things in Nature are merely concrete manifestations of the immanent essence in Nature. The tree can be seen as an encapsulation of Nature, symbolically spanning many generations. Like an art that remains representational but ostensibly signifying intangible, universal ideas, trees are rooted in the past but reach into the future: anchored in the earth, they extend to heaven.iii

With thanks to Ernst van Jaarsveld, Botanist and Horticulturist, Kirstenbosch National Botanical Gardens, for information on the trees in this painting. 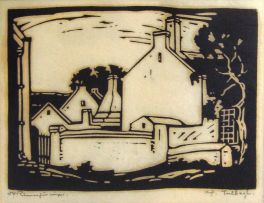 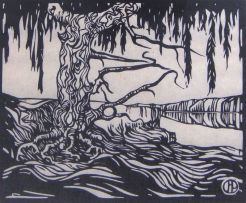 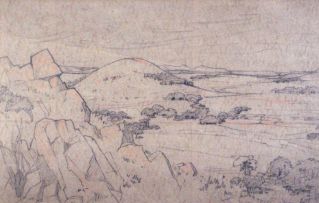 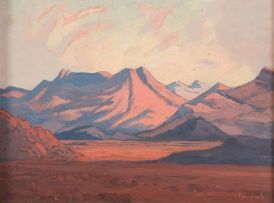 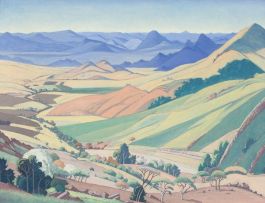 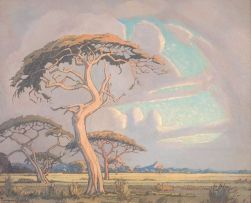