1948 was the culmination of Irma Stern’s artistic career. In that year she would publish her illustrated travelogues which documented her two journeys to Zanzibar on the Swahili Coast of Africa in 1939 and 1945 before visiting Europe, and, perhaps most importantly, the Venice Biennale .

The present lot is one in a series of views of the Venetian lagoon and Grand Canal that Stern painted on this pivotal trip, signifying a vital shift in her subject matter that would persist for the rest of her life. Stern, as Marion Arnold notes, ‘has often been discussed as a painter of Africa, but after the Second World War – for almost twenty years of her career – she painted Europe’.1

It is important to remember that the geopolitical ramifications of World War II had prompted Stern to look for her inspiration elsewhere. Finding it in Zanzibar and later in the central African forests of the Congo, she would go on to produce some of the most desirable paintings in her oeuvre. The critical reception of these pictures was not however to be found at home in South Africa, but instead in the cosmopolitan centres of Europe. As a consequence in 1947, Stern would mount a career defining solo exhibition, Peintures d’Afrique at the Galerie des Beaux-Arts in Paris, featuring 115 works of varying media. These would go on to be shown in London, Rotterdam and Brussels, receiving rave reviews in the Dutch press.

In the wake of World War II, the Venice Biennial can be understood as a period of renewed internationalisation for both Stern and Europe itself. Describing her trip to Italy at the end of 1948 as ‘a very sudden enchantment’ Stern was able to ‘see and hear all that Europe gives in such a short time’ including ‘the pictures from 14 different countries’. She also confesses in her letters that she painted Venice ‘quite a few times’, clearly taken by the historical splendour and sweeping vistas of this floating city.2

The present lot is a view reminiscent of a scene by Canaletto titled The Grand Canal and the Church of the Salute executed in 1730. In Stern’s version she displays her command of translating moving watery expanses into oil paint. Although loose, her mark is assured with her understanding of perspective illustrated by the triangular picture plane that draws the viewer’s eye into the darkening canal.

Central to the composition is the grand basilica of Santa Maria della Salute (Saint Mary of Health). Completed in 1687 the Salute is the most recent addition in what are often referred to as the Venetian ‘plague churches’.3 Dedicated as a votive chapel to Our Lady of Deliverance after a devastating outbreak of the Black Death in the summer of 1630 claimed nearly a third of the population by 1631, the Salute stands at the entrance to the Grand Canal and is part of the city’s iconic Baroque skyline.

The Salute would feature in another of Stern’s panoramas of the lagoon painted from the Giardini, where water favours architecture. The present lot, presumably painted from Stern’s hotel room on the Grand Canal explaining the compositional elevation, captures the setting sun and the play of atmospheric light on the domes of the basilica. Here Stern’s use of colour and line owes itself move to the French Post Impressionists and the likes of Cézanne than it does to the emotive palette of Max Pechstein and her German Expressionist roots.

This turn to a looser, more diluted application of paint would continue to characterise much of Stern’s output from this point onwards as she continued to explore the developments of late European Modernism. Yet her Venetian pictures made in 1948 are exemplary because they represent Stern in between artistic periods; at once basking in the glow of the critical achievements made by her African pictures of the 1940s, she would simultaneously begin navigating her future course that would see her exhibit on the Venice Biennale for the next decade, appearing finally as the featured artist on the South African Pavilion in 1958, marking another pinnacle of her life’s work. 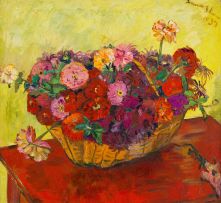 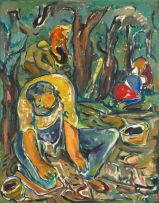 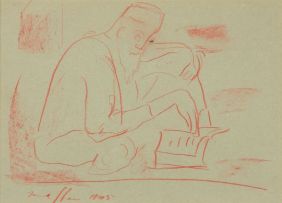