The present lot was created between 1906 and 1907 as part of the sculptures specifically created for the Anton Van Wouw Syndicate. In 1908 the plasters belonging to the Syndicate were sent to the Giovanni Nisini foundry in Rome to be cast. Between 1934 and 1936 the Nisini foundry became the Galileo Massa foundry and the cast work carried on at that foundry until at least 1955. The original plasters that were at the Massa foundry were never retrieved by the family. In my opinion the work is an Italian cast, cast from the original plaster before 1955. The base of Rustenburg granite is consistent with those used by Van Wouw after 1935 when he first began using the GW Harmsen Marble and Granite works in Johannesburg to supply bases for his sculptures. 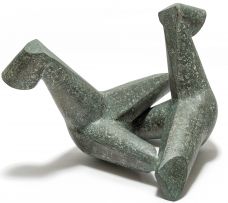