Mr JE Holloway, son of the original owner of this work, records in a typed note signed and dated 18 May 1999 how the family acquired the sculpture:
‘I was a boy of 13 or 14 when one day I went shopping with my mother, Tienie Holloway (wife of Dr JE Holloway, then Secretary for Finance and  later South African High Commissioner in London) in central Pretoria. It was during the war years and many bodies were collecting money for various causes. I well remember the little shop in the old African Arcade (in Pretoria) which the Dutch Relief Fund had rented for their fundraising. In pride of place in the window stood the Daggaroker with a notice: Donated by Anton van Wouw, Tickets 1/-, Value Sixty Pounds. My mother spent three shillings on raffles that morning, because, in her own words: ‘For St John’s Ambulance because my brother Baden was up North as a medic through his St John’s work; for the Belgian Relief Fund because I learnt to love the Flemish people when Jack was studying in Ghent before and at the outbreak of the First World War; and for the Dutch Relief Fund because I wanted the Daggaroker’.

Time passed and one evening as the family was starting dinner I answered a knock at the front door. There was Mijnheer Johannes Postmus,  Governor of the S.A. Reserve Bank, whom I knew well as his son and I were good friends. Postmus, who it transpired was also Chairman of the  Dutch Relief Fund, asked to see my father. Presently my father called me back to the front door and together we took delivery of the Daggaroker. We returned to the dinner table and, much to my mother’s consternation, said not a word. Dinner finished, we went to the lounge as usual, and there on the small stinkwood cabinet next to the front door reposed the Daggaroker, a place of honour which it retained for all our years in ‘Ellensgate’.’ 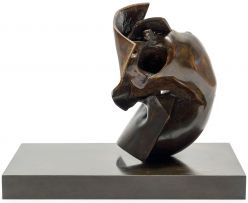