In 2012, Wim Botha presented his new sculptural installation, A Thousand Things, at Stevenson, Johannesburg. The room-scale work was populated with a large number of carved wooden busts of human subjects, together with various wild and domestic animals. The medley of figures – non-specific men and women, felines, canines, birds of prey, a skull – did not cohere into an overarching narrative. Rather, the assembly functioned as an open-ended and adaptable archive of animal forms, a ‘zoo of reality,’ to quote Jorge Luis Borges, as distinct from the ‘zoo of mythologies’ enumerated by this Argentinian writer.1

Botha is well known for his appropriations from renaissance and baroque sculpture, a habit he has wed to the skillful use of unorthodox materials such as anthracite, books, mielie-meal and polystyrene as a means to amplify and/or revivify perceptions of hackneyed sculptural forms and pose reflexive questions about weight and permanence in sculpture. Botha however also works with traditional materials such as bronze, wood and marble. The figures from his A Thousand Things series were all carved from rough laminated pine, including this plinth-mounted bust with memento mori from 2013.

The present lot is typical of the larger series, both in terms of its stylistic attributes (the male figure is a generic type) and the rough-hewn technique used by the artist. Botha has described how he purposefully approached his material with ‘aggressive motions and an avoidance of refined form and laboured detail, looking instead for accidental marks and spontaneous expressiveness.’2 The outcome was raw and expressive pieces with the honesty of pencil drawings. Botha then crudely dressed his forms with white paint, the haphazard paint ‘creating a partial skin that contrasts with and conceals the raw and rough surfaces of the wood’. 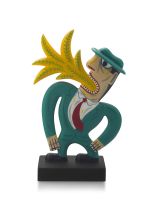 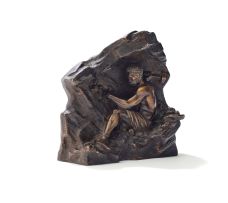 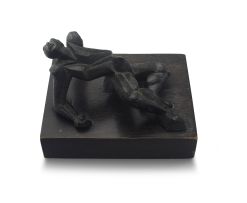 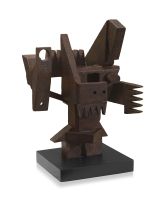 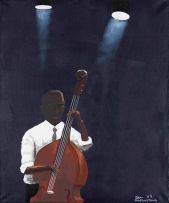