Norman Catherine tends to work with a well-defined repertoire of scenes, motifs and characters that he returns to and adapts for whatever his artistic needs. Cats and sleeping figures have featured prominently since the 1980s in his highly stylised and allegorical output. Painted in his meticulous graphic style, the present lot from 2004 updates a 1993 painting, Dreamwalker, depicting a man resting on the back of a scowling cat beneath a crescent moon (in the earlier painting the cat’s head appears on the left and the man’s arms are exposed)1. His psycho-surreal fantasy is charged with subconscious possibility: Edgar Allan Poe and Carl Jung both wrote texts linking black cats to female archetypes. Catherine further updated this scene in a 2009 work on paper in which the cat is more naturalistically portrayed and the man wears an eye mask; it appears on the cover of Catherine’s jazz-musician friend Carlo Mombelli’s 2016 album, I Press My Spine to the Ground. 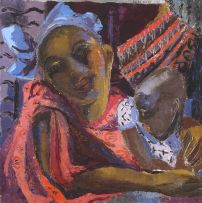 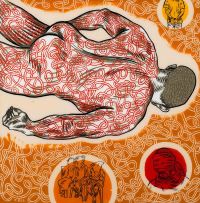 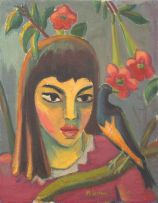 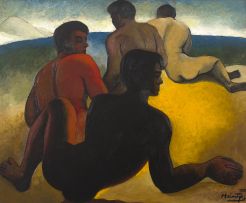 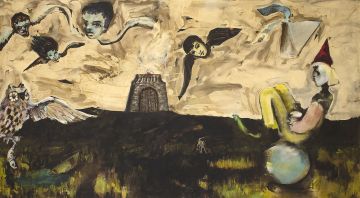