'Jacob van Schalkwyk is an artist and a novelist. His earliest works after graduating from the Pratt Institute in Brooklyn, New York, and returning to Johannesburg in 2008, chiefly used black. This lot from Fun and Games (2012), a series of works on paper produced after his move to Cape Town, evidences a newfound interest in colour, now integral to his practice. The interlocking triangles of red and blue in this lot are suggestive of a backgammon board and speak to Van Schalkwyk’s investigation of the distinction between form and colour, using the hard-edged abstraction of Bridget Riley and Odili Donald Odita as a foil.‘

cf. Gallery AOP, Johannesburg, Jaco van Schalkwyk: Fun and Games, 24 March to 11 April 2012. Works from the same series were exhibited. Similar examples are held in the Hollard and Nando's collections. 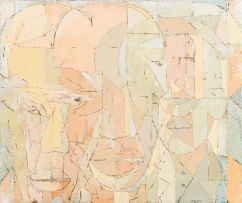 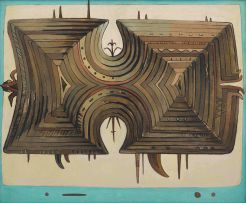 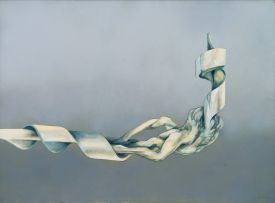