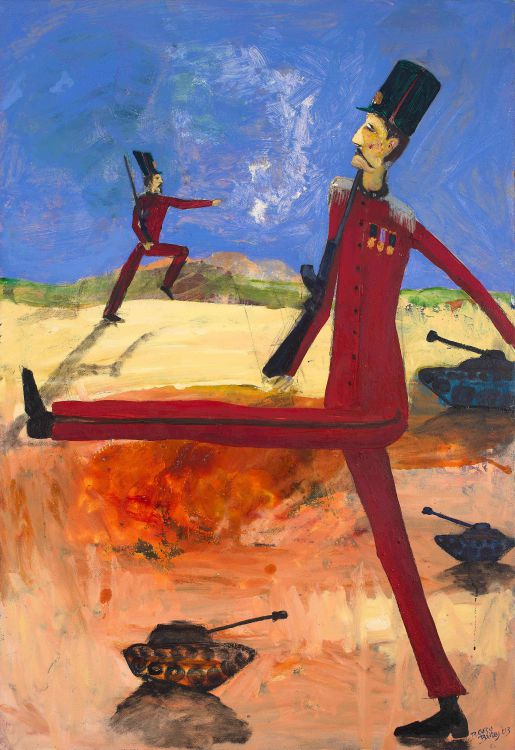 Beezy Bailey
South African 1962-
Onward Christian Soldiers
signed and dated 03; inscribed with the title on the reverse and the stretcher and further inscribed with the artist's name, title, medium and dimensions on an Everard Read label adhered to the reverse
oil on canvas
150 by 100.5cm excluding frame


Beezy Bailey’s Onward Christian Soldiers, named after the rousing, motivational nineteenth-century English hymn, was created in response to the USA’s 2003 invasion of Iraq, however, instead of looking like a modern military force to be reckoned with, the moustachioed soldiers are decked out in nineteenth-century-style military garb. They wear kepis, side-striped trousers and tunics, complete with epaulettes and chest medals, and although they carry semi-automatic weapons, their high kicking goose-step stride makes them look like wind-up automatons, marching chaotically in opposite directions and dodging the swarm of tiny toy tanks buzzing around their ankles.

‘While there is a lot of playfulness in the spontaneous bright colours and imagery [of Beezy Bailey’s work], there is also a sense of sadness which comes through … “I don’t see myself as sad,” he explains, “but when you begin to reflect on it, we live in quite a sad world and I think an artist’s job is to reflect that”. With his poetic licence in one hand, and paintbrush in the other, Bailey is perfectly poised to make some pointed remarks about our society. “My portrayal of soldiers is similar to that of artist Robert Hodgins’s portrayal. It is the idea of soldiers being primarily tin soldiers, or clown soldiers, or soldiers as fools. There is something very ridiculous about going to war and killing people, and that’s why they look like tin soldiers”.’1 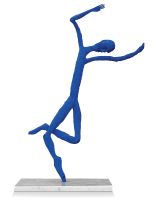 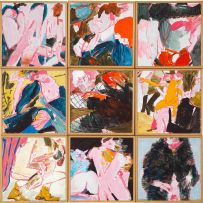 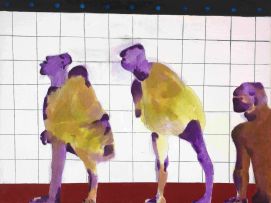