In Irma Stern’s Lilies the flowers appear to burst from the vase as if in a seasonal statement of spring. These Madonna lilies are “distinguished from St Joseph’s lilies by their shorter leaves, yellow flower centres and heavy, pollen-laden anthers. As symbols of purity, they feature in innumerable religious paintings and depictions of Mary.” i

Despite their symbolic attributes, Stern ascribes to the flowers and objects in this still life a strong physicality that makes them convincingly real. The vase is, in all likelihood, a Chinese jar which Stern acquired for her own collection and which is currently in the UCT Irma Stern Museum (catalogue number 534). With its brownish slip and heavy copper-green glaze, it stands 21 centimetres.

But never an artist to be constrained by perceptual reality, Stern has allowed herself the licence to explore the medium of paint in ways that heighten the sensuality of the medium. The fluid contours of the ceramics, the glowing golden colours and the sure brushwork are all evidence of the fluent, confident style of Irma Stern at the height of her powers.

In contrast to her more colourful paintings, the artist has used a quiet palette and infused the painting with light by employing a predominance of crisp whites that range to creamy tones in the flowers and fabric, offsetting these with lemon yellow pollen spatters, a rich cadmium yellow background and the raw ochre jar. The effect is one of harmony and subtlety, enlivened by complementary contrasts in the orange stamens and fruit against the blue vase and bowl and the red and green of the foreground apple. 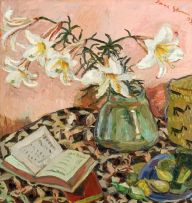 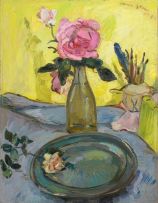 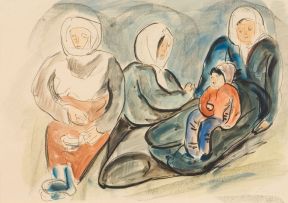 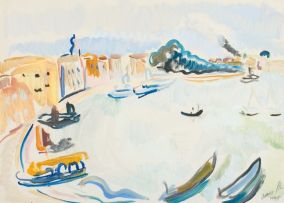 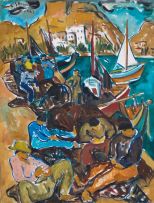