Born in Worcester in the Western Cape, Zwelidumile Mhlaba, better known as Dumile Feni, relocated to Johannesburg where he received informal training from Ephraim Ngatane who advised he study at the Jubilee Art Centre under Cecil Skotnes. He was also encouraged and supported by Ezrom Legae and Bill Ainslie, amongst others. Despite being selected to represent South Africa at the São Paulo Biennale in 1967, he was subjected to sustained harassment because of the powerful political statements in his work. As a result he left the country for London where he enjoyed success with exhibitions at the Grosvenor Gallery and the Camden Art Centre. In 1979 he moved to the United States and after completing the graduate program in film and television at New York University, he settled in New York. He exhibited, amongst others, on the benefit exhibition of the International Defence and Aid Fund for Southern Africa, maintaining that his intention was “to keep the conscience of the world alive to the issues at stake”.i

Journalist, academic and political activist, Ruth First was the daughter of Jewish immigrants. As a B. A. (Social Studies) student at the University of the Witwatersrand from 1942 to 1946, her fellow students included Nelson Mandela and Joe Slovo, whom she later married. In 1953 First helped found the Congress of Democrats and edited Fighting Talk, a journal supporting the Congress Alliance. She was on the drafting committee of the Freedom Charter and in 1956 both she and Slovo were arrested and charged with treason along with 156 other leading figures and stood trial until 1961 as one of the accused in the four–year-long Treason Trial.

During the state of emergency following the Sharpeville shooting in March 1960, First fled to Swaziland with her children and settled in London. From 1977 she was based in Maputo, Mozambique where she was appointed professor and research director of the Centre for African Studies at the Eduardo Mondlane University until her untimely death in 1982.ii

Lilian Ngoyi’s energy and her gift as a public speaker won her rapid recognition and within a year of joining the ANC in 1950, she was elected as president of the African National Congress Women's League. In 1956 she was elected president of the Federation of South African Women (FEDSAW) and became the first woman elected to the ANC national executive committee. She addressed protest meetings against apartheid in a number of world centres, including London's Trafalgar Square.

On 9 August 1956, the day now celebrated as Women’s Day, she led the women's anti-pass march on the Union Buildings in Pretoria. Holding thousands of petitions in one hand, it was Ngoyi who knocked on Prime Minister Strijdom’s door to hand over the petitions. In that same year Ngoyi was also arrested and was tried alongside her fellow Treason Trialists.iii

In Feni’s tribute to these two extraordinary South African women, Ruth First and Lilian Ngoyi are depicted as strong individuals supporting one another in a firm embrace. Feni was recognised as amongst the foremost artists able to articulate the political climate of his day and called ‘the Goya of the townships’. As a painter, sculptor, graphic artist, poet and film maker, he is celebrated as one of the greatest African artists of the twentieth century. Renowned for his African Guernica in the Fort Hare Collection, Dumile Feni is represented in the permanent collections of the Museum of Modern Art, New York and of major South African art museums.

i Bruce Smith, Dumile Feni: The artist and his work, August 2004.
http://www.dumile.org.za/history/history_smith-b_01.htm 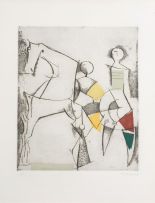 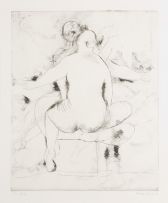 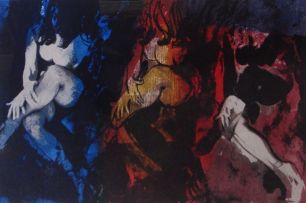 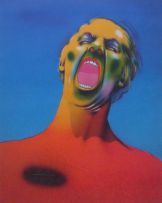 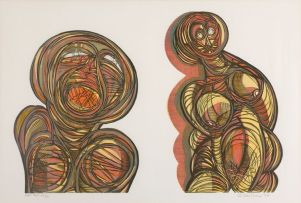