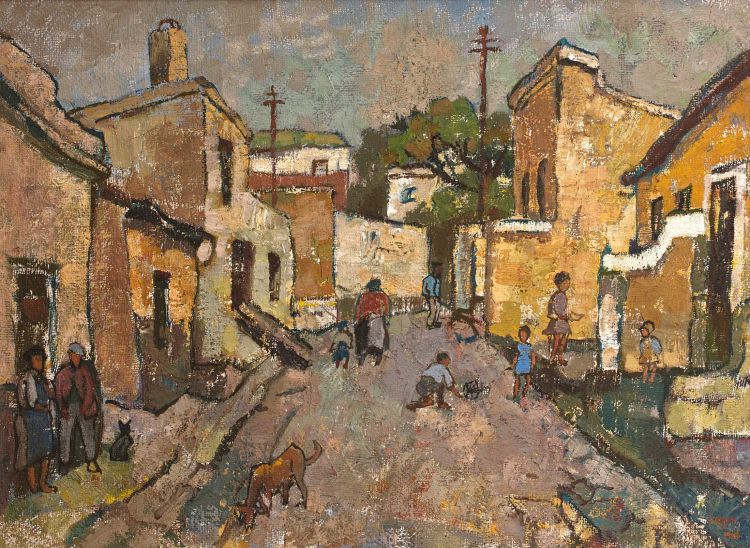 Gregoire Boonzaier
South African 1909-2005
Malay Quarter
signed and dated 1946; inscribed with the title on the stretcher
oil on hessian
51 by 71cm


The Cape landscape and homestead, subjects of Boonzaier’s early career, drew inspiration from the work of family friend and artist, Pieter Wenning, executed during his painting excursions to the Cape from Pretoria. Wenning’s Cape subjects included landscapes, historic homes and established properties, frequently featuring edifices of crumbling grandeur. As it had been for Wenning, this love of ‘character’ and history endured and formed an identity for Boonzaier.

As he said: “From childhood I have been unimpressed by new suburbs, anonymous cities with ugly skyscrapers, air pollution and the rush and hubbub of teeming traffic and freeways. These symbols of our modern, vulgar supermarket world depress and sadden me. Even as a child I found old Cape Town an exotic place. It has a unique quality found in no other city in our country. It is rich in colour; colour which is present in its typical Cape cottages, in its roofs, walls, windows and doors. The striking street life has always fascinated me: pushcarts, vegetable carts, fish carts, laundry gaily fluttering in the breeze and, in the good old days, goats and chickens, as well as a plethora of cats and mongrels of uncertain extraction”. 1

In this post-war painting, the artist showcases the pictorial elements that would later make him a household name. These include his distinctive use of line which is uniquely adept at capturing age and character in a flickering palette of earthy warm ochres, greens and blue tones. Boonzaier worked directly from his subject en plein air and when sketching or painting would often attract a crowd of curious onlookers.

The Georgian buildings are further augmented with impasto strokes and the street is animated by a community of people in situ. Figural paintings by the artist are rare, and this work is further enhanced by the added presence of a cat and dog.

Malay Quarter serves not only as a record of a vanished era but is also as a community portrait in its own right. 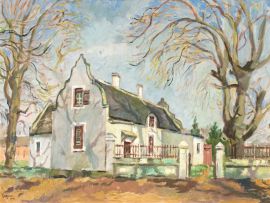 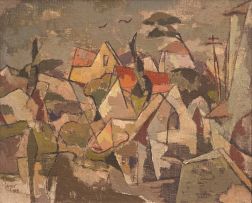 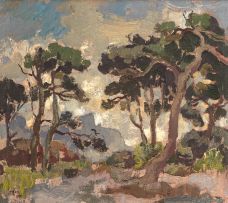