The decade of the 1940s is often defined as a period of wanderlust in the career of Irma Stern, with her trips to the Belgian Congo in 1942 and 1946 and Zanzibar in 1939 and 1945 resulting in some of the most desirable works in her artistic oeuvre. Whilst her first journey to Central Africa is extensively documented in her travel diary, Congo, published in 1943, Stern’s second visit is characterized by a sense of ennui resulting from her isolated loneliness and recurring dreams of her mother who had passed away two years prior. 1

Illustrated in Marion Arnold’s book, 'A Feast for the Eye', the present lot was executed during her second visit to the region in 1946, which included an extended period spent on Lake Kivu in present-day Rwanda. Due to the tropical conditions, Stern did not work indoors, preferring to paint en plein air on the verandah of her villa on the shores of the lake. Working from day-break until sundown, she would remark in a letter to her beloved friends, the Feldmans, on the uncontrollable nature of the equatorial light. 2

Comparatively shorter than her first visit, Stern returned home after suffering a bout of malaria which, together with the “frightful” light, had further hindered her progress. According to Mona Berman, her inventory included “fourteen big canvasses, several charcoal works and a large selection of outlined work” which were presumably finished later on the easel at The Firs in Cape Town.3

Despite the physical demands placed on her during this second trip, the work that Stern produced in the Congo, as with her Zanzibari paintings, attracted significant praise from friends and critics both at home and abroad. Rested and rejuvenated, Stern now set her sights on Europe. Since the advent of World War II and the rise of anti-Semitism, Stern had stayed away, instead seeking new avenues in Africa (such as Zanzibar and the Congo) to explore during the war years. But now, as Europe started to rebuild, it was time for her return.

A Watussi Woman with Mountains was exhibited twice in Europe, with its first showing taking place in Paris on her solo show Irma Stern: Peintures D’Afrique at the Galerie des Beaux-Arts located on the fashionable rue du Faubourg Saint-Honoré, just three blocks away from the Champs-Élysées. Run by Georges Wildenstein, the second in a long line of Jewish art dealers, the gallery had hosted the famed Exposition Internationale du Surréalisme in 1938 which featured Marcel Duchamp, Salvador Dali, Max Ernst, Man Ray and André Breton.

Stern’s own artistic language was very much rooted in German Expressionism, partly as a result of her friendship with Max Pechstein whom she had met in 1917. Now, at the height of her career, Stern’s brushwork reveals a confident painter, deliberate in both colour and composition. The effect of that “frightful” light here seems to resonate from the painting, evidenced in the subtle yellow halo that frames the sitter. As Marion Arnold writes “her paintings are made to be looked at and to be savored for their energetic orchestration of colour, shape, line, tone and texture. They assert the making process, the expressive power of pictorial form and the physicality of the materials used. But, however absorbed Stern was in the process of painting, her subjects maintain their importance”. 4

Stern’s Paris exhibition was a roaring success, bringing her “widespread interest and eulogistic comment in French art publications”. 5 As an article in the Daily Argus reports, upon packing the exhibition Stern was approached by the committee of the Musée d’Art Moderne in Paris that had decided to purchase a work for the museum's permanent collection. Of the 115 works shown in Paris, 25 (including Watussi Woman with Mountains) were then sent to London for another solo show at the exclusive Roland Browse & Delbanco, run by the self appointed “Duchess of Cork Street”, Lillian Browse. Here the work was presumably procured by Dr R. L. Worrall, a noted philosopher and physicist who had corresponded with both Sigmund Freud and Albert Einstein.

The power of A Watussi Woman with Mountains lies in Stern's ability to render accurately the sitter's inner presence through the skillful painterly descriptions of her outer world. Wearing a red mushanana, a traditional dress worn by Rwandan women consisting of a skirt bunched at the hips together with a sash draped over one shoulder, her head is bound in a green igitambaro. The formal use of these two contrasting complimentary colours gives the work an overall aesthetic unity, whilst the receding mountains provides the composition with both form and structure.

Yet there is a certain dignified reticence that is inescapable in the sitters gaze; a proud assertion that defies external description, revealing instead an internal sense of agency. This is possibly due to the broader socio-political context in which the painting came into being. As Mona Berman observes, “the Congo of 1946 was very different from the region that had so fascinated (Stern) on her first visit. A political change had taken place, and the Belgians no longer enjoyed undisputed colonial power. This was reflected in the restless mood of the people and Irma felt it keenly”. 6

Whilst independence would only come to the region some 15 years later, what we see is the beginnings of a post-colonial subjectivity where the negotiation between artist and sitter comes to the surface, presenting a new set of tensions around the act of looking and the agency of recording.

Reflecting on her portraits, Marion Arnold writes that “many of Stern’s paintings and drawings are complex statements about identity. They record appearance, suggest character and investigate the human condition from the artist’s perspective. But a portrait is never merely the objective record of another; it is a response to the human tendency to consider oneself in relation to others. An extremely self-conscious art, portraiture is the result of a contract between an artist and the model that licenses staring and sanctions intrusions on personal space. It is a negotiation between one and another…”.7

Marion Arnold (1995) Irma Stern: A Feast for the Eye, Vlaeberg: Fernwood Press. Illustrated in a black and white photograph of the artist in her studio on page 4.

Paul Cullen (ed.) (2003) Irma Stern: Expressions of a Journey, Johannesburg: Standard Bank Gallery. Illustrated in a black and white photograph of the artist in her studio on page 60.

Jillian Carman (ed.) (2011) Visual Century: South African Art in Context. Volume One: 1907-1948, Johannesburg: Wits University Press. Illustrated in a black and white photograph of the artist in her studio on page 144. 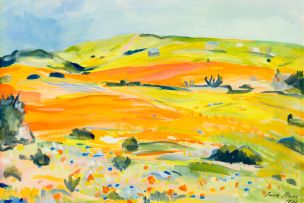 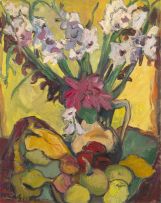 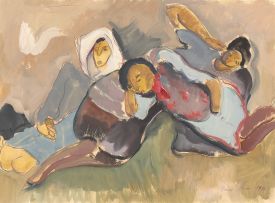