Deborah Poynton
South African 1970-
Safety and Security, diptych
each signed, dated 2005 and inscribed with the title on the reverse
oil on canvas
each: 205,5 by 300cm

Deborah Poynton's diptych Safety and Security (2006), which was also the title of her 2006 solo exhibition at Stevenson in Cape Town, depicts some sixty individuals gathered in the public square of the Cape Town civic centre. The artist's characteristic rich and realistic depictions of the people who populate her work are here shown in great detail, with each individual personality highly developed.

Poynton's expansive canvasses are inhabited by a composite of individuals. She assiduously collects fragments of images from which she then selects the people, objects and settings to include in her imposing paintings, which bear veracious witness to the world around us.

The public square is historically a space where people meet, socialize, interact and communicate. Yet here she depicts the gathering of modern day humans as figures set against a stark twilight-lit concrete architectural space. All the characters are detached and isolated from one another, in spite of their close proximity, keeping them 'safe and secure' from interaction with other human beings.

Even the striking, sensual, central nude female figure is viewed with muted interest and a lack curiosity or sexual tension. She is remotely viewed through the lens of desensitizing electronic gadgets, or not all. Her gaze is directed at the viewer, reminiscent of Edouard Manet's Dejeuner sur l'Herbe (1863), but the disinterested and distracted audience denudes her of her sexuality. The hint of aging and decaying flesh so prevalent in Poynton's work, here underscores the fleeting nature of beauty and our mortality - even of the stereotypically beautiful woman.

In Safety and Security the elderly couple in the foreground turn their back on the crowd, setting themselves apart from a world that no longer makes sense to them. They seem simultaneously bemused, resigned and removed from the scene. The lackluster crowd behind the couple focus attention on something out of sight of the viewer. The characteristically bored and mostly ineffectual security guards are as disinterested in the scene attracting the attention of the crowd as they are of the woman, those around them, and the viewer too.

It is a powerful comment and indictment on the world we inhabit today, a world in which the isolated person is shielded and disconnected, showing little or no engagement with those around them. 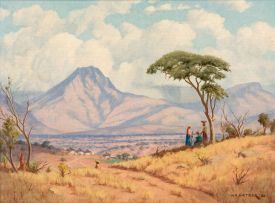 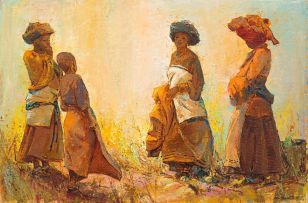 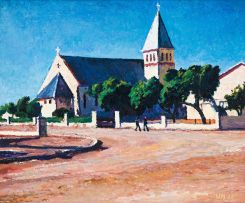 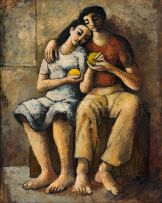 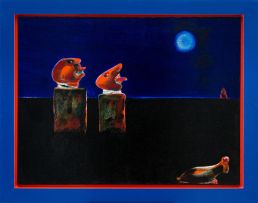