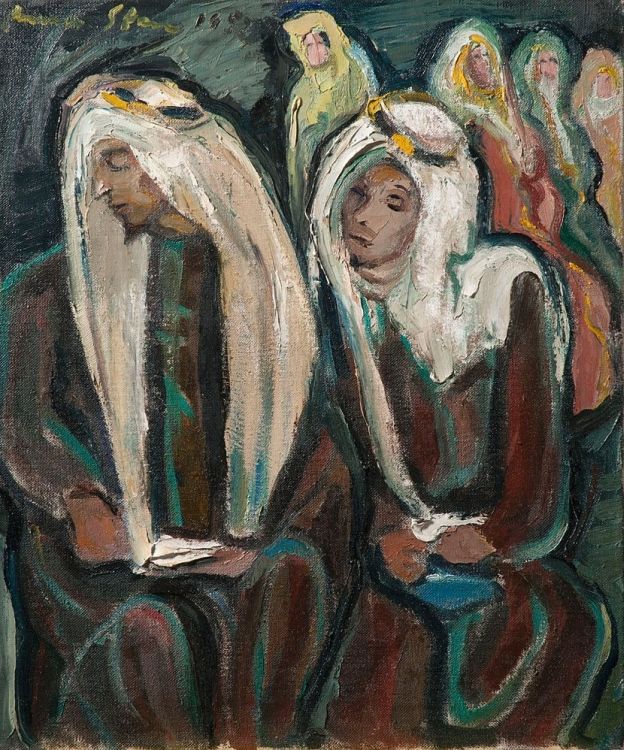 
Irma Stern’s Two Seated Arabs, with their aquiline features and simplified forms, offer an elegant reminder of the artist’s travel adventures and her passion for different cultures. It has been pointed out that Stern was far more interested in African, Malaysian and Arabic culture than the majority of white people at that time.1

In her earlier years she travelled frequently to Europe often via the East Coast and as early as 1904 stopped over in Zanzibar where she might have seen similarly robed figures. These experiences were translated into works of art that embodied Stern’s concept so vividly portrayed in her journals, of herself as the bringer of gifts from Africa to Europe, and “of the transmission of visions from one world to another”.2

In the foreground, Stern places two men, unified by their similar dress and grounded by the earthy brown of their robes. Their regal heads, each framed by a kufiya, or white cotton scarf held in place by an agal, or rope circlet, individualise them. Their hands, gathered in their laps, appear to be holding documents, perhaps books. Behind them women, draped in flowing, colourful garments of apple green and cinnamon, assemble.

This painting has an interesting history. It was one of the paintings that the artist kept in her home and which she included in her estate that was bequeathed 'for the encouragement and promotion of Fine Arts within and outside the Republic of South Africa'.3 The Trustees approached the University of Cape Town with a proposal that they acquire Stern’s home, ‘The Firs’, for a nominal sum, thus establishing The Irma Stern Museum, a landmark cultural institution in the city and one of which the artist would have been proud. Under the title Two Arabs, it appears on a list of paintings that were sold in 1981 to raise funds for the core collection.4

Neville Dubow, former Director of the Museum, notes that for Stern, 'Africa represents a freedom in which she could travel, the burden of her possessions lightened by her drive to create and to be able to share the fruits of that creation'.5 A painting such as this reminds us of that love of travel and adventure, of her interest in cultural differences and of her extraordinary generosity of spirit.


Acquired from the artist's estate by Mr Louis Schachat