Anton van Wouw
South African 1862-1945
The Scout
signed, inscribed 'SA' and bears the foundry mark
bronze with a brown patina on a wooden base; cast by the Massa foundry, Rome
height: 24cm including base; length: 66cm; width: 35cm

Anton van Wouw, the Dutch-trained master sculptor, who had settled in the Transvaal by 1890, turned his full attention to a body of small-scale bronzes from 1907. Backed at the time by an investment syndicate, and working from a studio in Sivewright Avenue in Johannesburg, the artist modelled a number of stirring and beautiful Boer and African figures which remain some of his most popular creations. He drew heavily and sympathetically on Boer War imagery in particular, conceiving iconic sculptures such as Slegte Nuus (1907), Die Noitjie van die Onderveld (1907) and Paul Kruger in Exile (1907). The present lot, The Scout, is part of this group, although it was likely produced a little later, certainly between 1908 and 1910. The earliest description of the work, accompanied by a photograph, appeared in The State in June 1910, with the reviewer marvelling at how the artist caught ‘the almost painful eagerness of the eyes’.

In this compelling study in suspense, Van Wouw shows a Boer guerrilla fighter on patrol, peering over a rocky edge, his body rigid and pressed to the ground, presumably checking on British positions. His Mauser rifle is placed to his right, under his felt hat, which has been removed to lower his silhouette. Likely thick with dust and sweat, his beard rests flat on the rockface, while some sense of the moment’s tension comes from the soldier’s stiff fingers, knuckles locked, straining under his weight. With much of the body under a thick blanket, but light touching the cheekbones and temples, one is quickly drawn to the soldier’s composed expression: it hints at Boer grit, nerve and discipline.

Rather excitingly, the Van Wouw literature has recently leapt forwards. Fresh research, led primarily by the University of Pretoria’s Gerard de Kamper and Chris de Klerk, has shed new light on the artist’s methods and casting histories. This particular casting was made under the watch of Galileo Massa who, working from his foundry on the Via del Babuino in Rome, took over many of the artist’s plasters from the mid-1930s.

AE Duffey (2008) Anton van Wouw: The Smaller Works, Pretoria: Protea Book House, another cast from the edition illustrated in colour on pages 84 and 85. 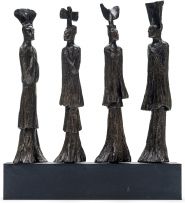 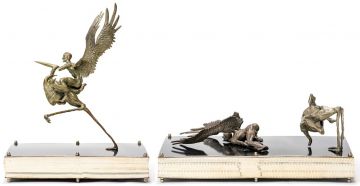 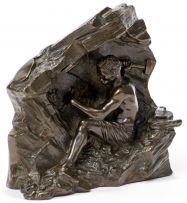 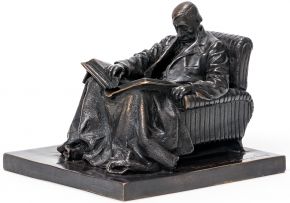