Anton van Wouw’s 1911 sculpture, Miner with Hand-drill, is one of the artist’s most recognisable sculptures and is widely considered one of his best. A.E. Duffey, author of Anton van Wouw: The Smaller Works, comments at some length on the superiority of the castings by the Nisini and Massa foundries in Rome. “It is remarkable to see how many differences there are between the finer details of the best Massa and Nisini castings and local creations. In this regard special attention should be paid to the hammer which is more prominent in the Italian castings, the cord of the water bottle which is clearer, the more accurate rendering of the rockface and the loincloth of the miner, the way that the top of the chisel has been damaged by continual hammering, the finish on the skin on the heels and feet of the miner and the portrayal of the hands.”1

Even at the small scale of this maquette, cast by Nisini, the details of the candle, rope, haversack and water bottle, are clearly visible, and the fine rendering of the miner’s muscles, hands, feet and hair are quite remarkable. As in the full sized version of this small sculpture, the contrast between the polish and lighter colour of the patina on the miner’s body and the dark, rough rock face marks out the exceptional quality of the casting.

The tension and concentration in the miner’s posture as he works, braced beneath a rocky ledge with only a candle for light, brings to life the realities of the difficult conditions under which miners worked at the turn of last century. Van Wouw actually visited mines himself to research his subject matter. In an article in Durban Technical College’s the Common Room Magazine, he wrote, “In order to absorb the atmosphere and conditions under which they work, I tried to take in all that appertained to the subject and after my visit to the Ferreira Deep Mine, I had the same model brought to my studio where he posed for me until the whole study was completed.”2

Strauss & Co. sold the larger version of this sculpture which set a world record auction price of R4 774 560 for a work by Anton van Wouw in November 2015. 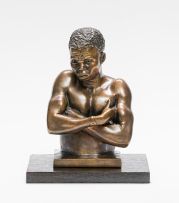 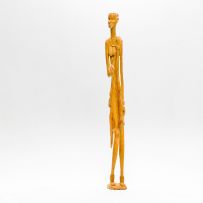 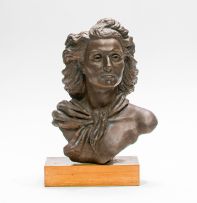