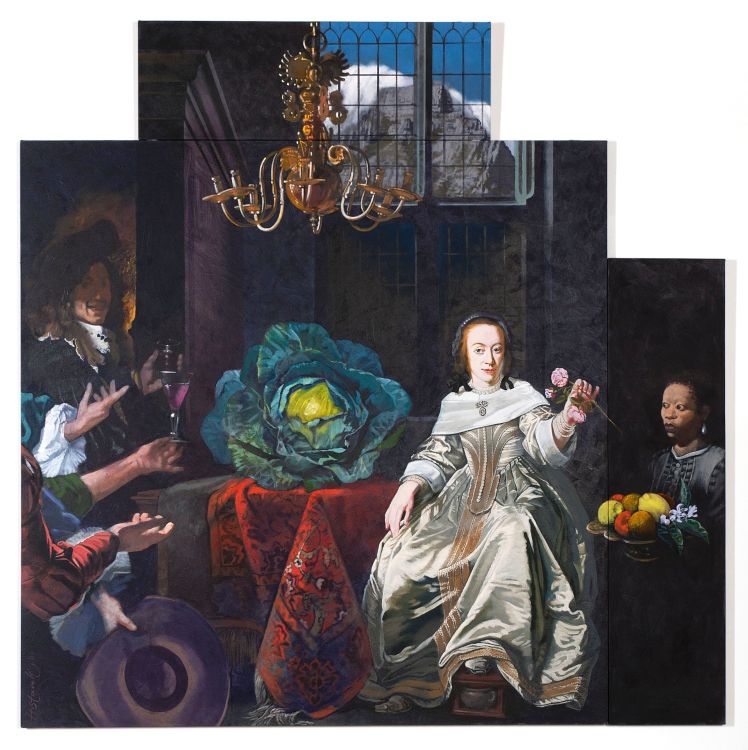 This is one of a series of four paintings which Helmut Starcke dedicated to “the woman behind the Governor of the Cape”, Maria van Riebeeck, née De la Quellerie. It forms part of a larger body of work in which the artist’s stated intention was to reclaim something of the drama of the confluence of art and history in the seventeenth century by contrasting the opulence of the Golden Age of Dutch art with the paucity of the colonial visual record of life at the Cape.
Dreams and Nightmares of M. De la Q., #2 speculates about the frame of mind of Van Riebeeck’s wife, having been transplanted from the exotic Batavia to the barren Cape. Here we see the First Lady graciously receiving the produce of the Company Gardens and the praises and admiration of all who have gathered for this occasion. The chivalrous doffing of hats and the raising of a glass of the best red wine all contribute to the festive atmosphere. However, the obvious sycophantism and the preposterous size of the cabbage are used to humorous effect to raise doubts about the validity of, and the credit for, these achievements.
The painting includes references to well known Dutch artists such as Gabriel Metsu (1629-1667), Jan Steen (1626-1679), Jan Vermeer (1632-1675) and Gerard ter Borch (1617-1681) to name just a few. It was first exhibited in 2004 on Starke’s solo exhibition entitled The Muse of History at the Old Townhouse on Greenmarket Square in Cape Town. Also exhibited was Clio, the Muse of History, painted in 2001, which was acquired by Iziko South African National Gallery and is now part of their permanent collection.
Helmut Starcke immigrated to South Africa in 1958 and taught at the University of Cape Town’s Michaelis School of Fine Art from 1969 until 2000. He was selected for the Venice Biennales in 1964 and 1966 and the São Paulo Biennale in 1969. Since 1963 he has held eleven solo exhibitions and participated in numerous group shows. He is represented in all the major public collections in South Africa as well as in several local and international corporate collections including the Chase Manhattan Bank, New York. 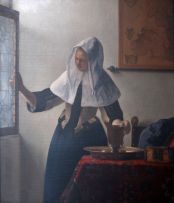 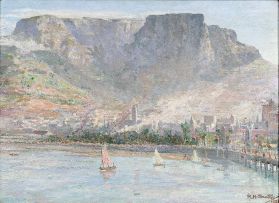 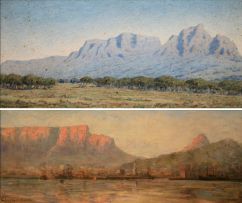