The 1920s represented a period of experimentation and innovation for Jacob Hendrik Pierneef. In 1925 he travelled to Europe, met Anton Hendriks (who became Director of the Johannesburg Art Gallery from 1937 – 1966) and invited him to South Africa. During this trip he also met the Dutch theorist, Willem van Konijnenburg, whose ideas on achieving harmony, balance and unity through the application of mathematical proportion, linear rhythm and simplified form, became the foundation for the artist’s mature style.
Consequently, Pierneef began shifting away from his earlier more spontaneous impressionist-influenced paintings towards a style that sought to emphasise the underlying structure of nature and the built environment rather than the effects of light on varying surfaces. Die Wynkelder occupies a unique position in this development in that it employs aspects of these two very diverse approaches, allowing us to witness how the artist crafted his new style.
In 1929 it was announced that Pierneef had received the commission for the mural-panels to be installed at the new Johannesburg railway station. These brought him to wider public attention and set the standard by which he would be measured. Die Wynkelder, with its impressive scale, may also be viewed as a study for these panels which came to define the characteristic style for which he became renowned.

A gift from the artist to Louis van Bergen, who was a close friend, and the proprietor of the Constantia Bottle Store in Pretoria.  The painting hung in the store for a number of years before becoming part of the inheritance of the then owner.  He consigned it to Volks Art Auctions, Pretoria on 14 September 1994 (lot 63).  It is illustrated in colour as frontispiece to the catalogue and listed as having been painted in the late 1920s. 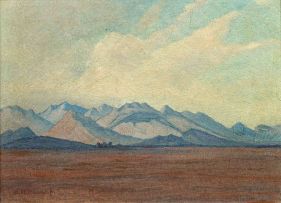 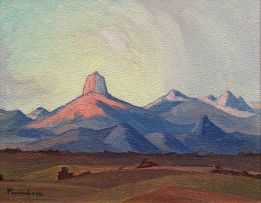 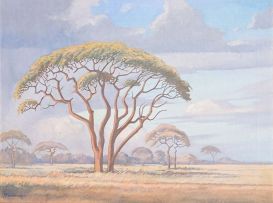 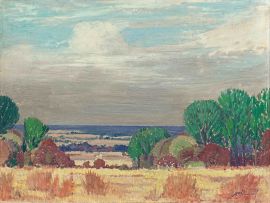 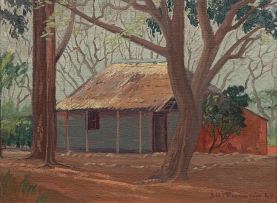