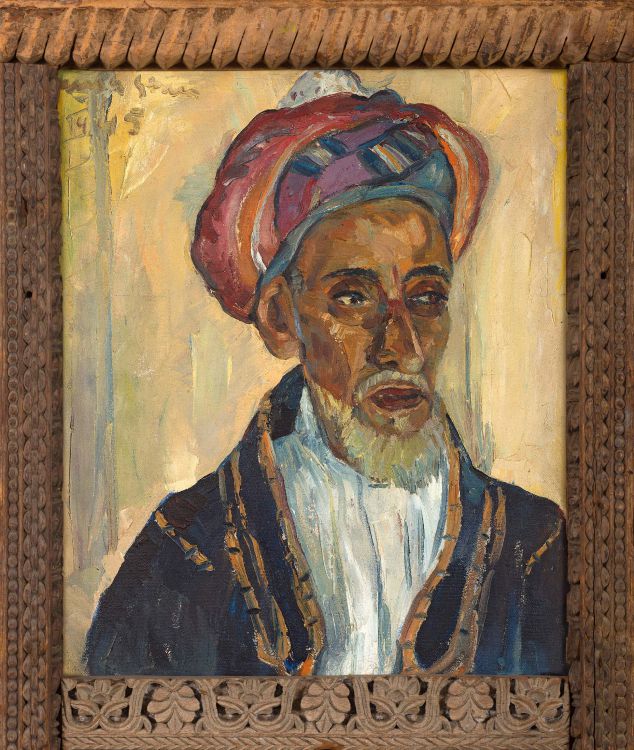 Irma Stern visited Zanzibar twice, in 1939 and 1945, with her portraits of the Arab nobility and Islamic clergy often considered the most desirable of her artistic output. Reflecting on her abiding interest in “psychologically nuanced depictions of an inner development”, Stern would later write that in Zanzibar, “working amongst people with a definite philosophy of life”, she found “a new truth - a truth from early times and handed down from age to age, a worship of spiritual forces”.1

The present lot is a previously unrecorded work by Stern in a series of only four portraits known to exist that depict noble figures from the court of His Highness Sultan Sayyid Sir Khalifa II bin Harub Al-Said, who reigned as the ninth Sultan of Zanzibar from 1911 to 1960. A cadet branch of the Al-Said dynasty of Oman, the Sultanate of Zanzibar was established as its own principality in 1856 after a succession battle between the sons of the deceased Sultan of Muscat and Oman, Said bin Sultan Al-Said.

Despite this apparent separation, the nobility of the Zanzibari court maintained their Omani heritage as evidenced in the colours of the sitter’s turban, commonly referred to as a mussar. Reserved exclusively for royalty, the specific combination of blue, lilac, purple and orange is known as a ‘Saidi mussar’ and has been used by Omani nobility for over three centuries, with the present-day Sultan, His Majesty Qaboos bin Said Al-Said, donning the colours for official state occasions.2

Stern visited the Sultan’s palace numerous times in 1945 where, on one occasion, she was granted an audience with the Sultana, Her Highness Sayyida Nour bint Ahmad al-Busaidiyah (affectionately known as Nunu), for morning tea. Recorded in her travel diary of the time is another account of a public address by the Sultan where, with attentive detail to the garments of the gathering nobility Stern describes her impressions of the scene;

“White bearded figures belonging to another age - a thousand years or more back; gold glistening on their coats, silk woven into their rainbow coloured turbans, wound artfully, each particular race having a different traditional way. Their hands gesticulating, their faces expressed depths of suffering, profound wisdom and full understanding of all the pleasures of life - faces alive with life’s experiences”.3

So clearly taken with the exotic dress and mystical character left by these figures “belonging to another age”, Stern must have been moved to paint the present lot. In a letter to her friends, Frieda and Richard Feldman, she declares her aspirations to paint such a portrait; “for drinks comes a man - who is the local Hofmeyr and who is trying to fix something up for me - as the people think the Sultan should be painted by me”.4

Whilst it remains unclear whether this opportunity ever materialised the sitter, cloaked in a black subaiyah replete with gold piping (indicating his standing in the royal court), bears a striking resemblance to the Sultan who kept his greying beard cropped in his later years.

Portraying her subject in a pose that is quiet and dignified, Stern’s confident brushwork and faithful attention to the detail and colours of the mussar  brings her written descriptions to painterly life. As Marion Arnold suggests, the paucity of information works in Stern’s favour when viewing the artwork as a historical record of a place and time.  As Arnold notes;

“It is often difficult to assess a portrait when it is first created, either because knowledge of the model interferes with responses to the painted image, or preconceptions disrupt the reception of the artistic representation. Only when the viewer is ignorant of the model’s appearance, or time alters expectations, can the painting be seen for what it is and assessed as a testimony to the art of its creator”.5

Purchased directly from the artist by the late Sol Munitz. 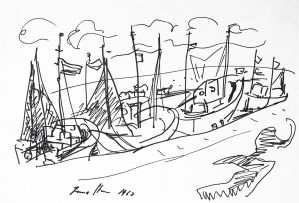 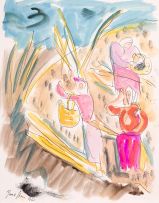 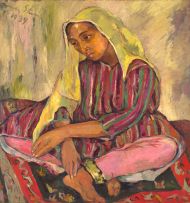 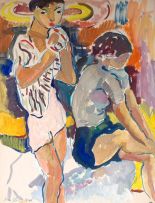