‘Newly married, living with my daughter and husband in an apartment in Killarney I spent nearly a full nine months on a mattress on the floor ravaged by nausea, my belly swelling, while my bedroom swayed beneath me. The baby was thriving. Unable to lift my head off the pillow on the bad days I lay there, feeling utterly wretched, hours spent gazing out the window. From my low vantage point the sky filled the pane with only a sliver of the neighbouring rooftop visible. This ambiguity, openness, and indeterminacy of land and sky caused the here and now to slip away, dissolve to some extent. It is that place where the sky meets the land (and the city) that captivates me and transcends the immediate, the personal, and represents something universal. The poignant and iconic architectural structures which mark the Johannesburg cityscape, loom in my memory and fill my canvases as vague remembered forms from the sublime vantage point of my childhood home. They are distant in time, yet present. They survive as ‘heterotopias of time’ such as museums which enclose in one place objects from all times and styles. They are in time but also exist outside of time because they are built and preserved to be physically insusceptible to time’s ravages.’1 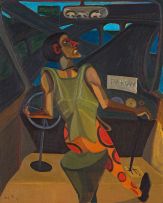 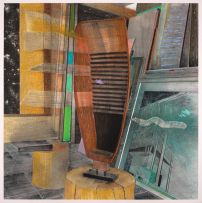 95
Conrad Botes
Selfportrait as a Woman (or why even the Devil suffers from castration anxiety), three panels, from the nine
ZAR 30 000 - 50 000 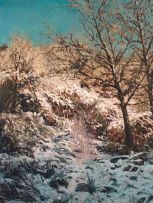