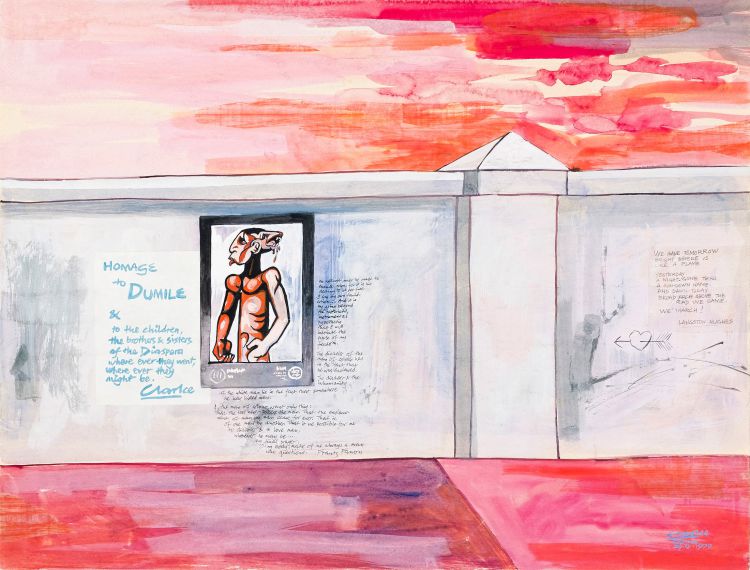 Peter Clarke
South African 1929-2014
Homage to Dumile
signed, dated 29.4.1979 and inscribed "France"; engraved with the date, title, "acquired from Artist's collection" and medium on a plaque adhered to the frame
gouache and collage
49 by 65cm excluding frame

Peter Clarke’s gouache, Homage to Dumile, was painted at the home of photographer Peter Hallett in Boule d’Amont in the Spring of 1979. Clarke’s work is dominated by a simulacrum of a Dumile Feni drawing Homage to Soweto, a double-headed beast, held in the collection of the Johannesburg Art Gallery (JAG). Hallet showed Clarke a UNESCO poster in which this image was used. Clarke’s work effectively acts as a veritable poster on a wall that could well have announced some sort of political rally during the Struggle. The image is surrounded by a dedication written graffiti-like on a wall by Clarke to Feni, as well as by quotes from Langston Hughes and Frantz Fanon. Feni, in exile in New York at the time, was one of many political activists, part of a large scale diaspora community living abroad. In Homage to Dumile Clarke pays tribute to the work these exiles did for the Struggle while living away from the country of their birth. The Hughes and Fanon quotes, ironically, are about reconstruction and reconciliation, not about resistance, war and destruction. Clarke, who was first introduced to the work of Feni by Hallett, subsequently saw and greatly admired Feni’s work, particularly Train Disaster at Iziko: South African National Gallery. 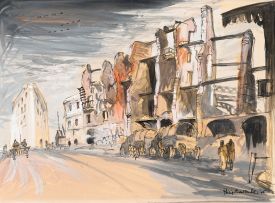 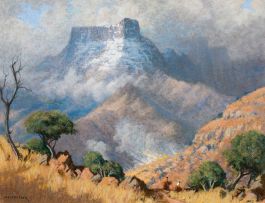 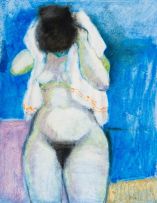 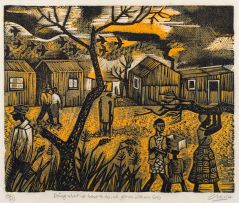