Diamond Bozas
South African 1923-2019
Still Life with Mealies, Bread, Onions
signed; inscribed with the artist's name, date 1965, medium and the title on a Tatham Art Gallery label adhered to the reverse
oil on board
160 by 72cm excluding frame

The work of Diamond Bozas is largely unknown outside KwaZulu-Natal, due to his relative isolation, business and family commitments in rural Zululand.

The artist grew up in Eshowe. After completing school he worked in the family bakery, using his holiday leave to study informally at the Durban Art School where he met and was mentored by Nils Andersen (1897-1972). He became a member of the Natal Society of Artists, and until very recently maintained an active membership.

In 1955 he was granted leave from the family business to study at the Chelsea School of Art, London. Fellow students included Elisabeth Frink (1930-1993), and Patrick Caulfield (1936-2005), with whom he maintained a life-long friendship. He graduated in 1959 with a National Diploma in Design. He had works accepted for the Royal Academy Summer exhibitions of 1956, 1957 and 1958. Bozas returned to South Africa with his wife, Tasia, in 1959, and resumed working in the family business until the bakery closed in 1975.

He established a plant nursery on the family property, and took up flower arranging, in due course representing South Africa at international floral art shows in England, Russia, and Australia. For many years he served as a committee member of the Natal Society of Artists, founded the Zululand Society of Artists in the 1970s, and was a founding member of the Natal Arts Trust in 1984, through which he was involved in the establishment of the Empangeni Art Museum and the Vukani Museum of basketry in Eshowe. He continues his weekly art classes, and involvement in the cultural life of Eshowe. Despite suffering a stroke earlier this year, he continues to paint, presently completing a landscape commission.

Bozas is a painter of still life, landscape and portraits. The foundations of his style, generally sparse and meticulously painted surfaces, were laid at the Chelsea School of Art. It is a style based in a general English modernist approach to painting developed from the beginning of the twentieth century, which accommodates a gentle abstraction of form based on accurate observation. It also pays homage to the social realism of John Bratby (1928-1992), founder of the Kitchen Sink School, in whose work Bozas and fellow students at Chelsea were particularly interested. However, Bozas remained grounded in tradition, influenced by his admiration of Jean-Baptiste-Siméon Chardin (1699-1779), and Paul Cézanne (1859-1906). He was fascinated by Chardin’s placement of objects in simple arrangements on surfaces against sparse backgrounds. His fascination with Cézanne’s paintings was the manner in which forms and space were concertinaed to emphasise the two-dimensionality of surface whilst retaining a sense of three dimensional form.

The underlying influence of both Chardin and Cézanne are evident in Still Life with Mealies, Bread, Onions (Lot 262), an ambitious painting entered and accepted for the Art South Africa Today show of 1965. It contains all the elements that would characterise the best of Diamond Bozas’ still life paintings of future decades: a continued admiration of the choice of simple domestic items favoured by Chardin, a similarly sparse setting and limited colour and tonal range. His choice of mealies and bread is, in part, a commentary that soaring bread sales from the family bakery were symptomatic of a change in diet amongst Zulu people. The chicken wire and newspaper suggest a mid-twentieth century contemporaneity, with references to the Kitchen Sink School admired by students of the Chelsea School of Art, and Bozas’ ongoing awareness of developments in contemporary art production. Bozas is best known for his iconic depictions of developments in contemporary art production.

Diamond Bozas is best known for his iconic depictions of the Zululand landscape: Isandlwana, Ongoye, Ondini, and the Nkwalini Valley. It is, however, the expansive vistas of sugar-cane farmlands around Eshowe which became his prime focus. In this view across Gavin Wiseman’s farm towards Ntumeni, Bozas concentrates attention on one phase in the biennial sugar production cycle, the early season. Cutting season is over, bare fields scattered with remnants of stripped leaves, amongst which the new season’s growth emerges. Attention to accurate detail belies Bozas’ deep spirituality in contemplating the cycle of life. 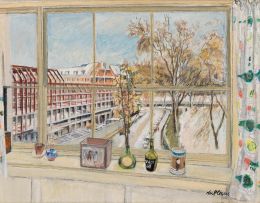 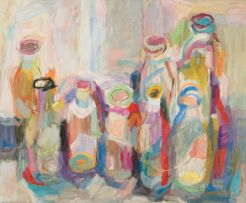 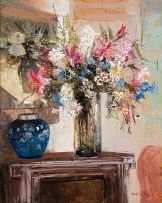 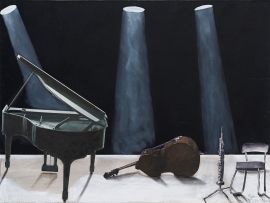 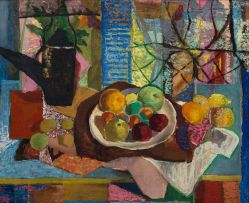