In Hilversum, in the Netherlands, during the Pierneef family’s first months in exile during the Anglo-Boer War, a young Henk was afforded late-night lessons in architectural drawing. Having already grown to appreciate clean, practical draughtsmanship from Gerrit Pierneef, his master carpenter father, he continued to refine his line, rely on his observation, and improve his accuracy in the conventional, no-nonsense classes at the Rotterdam Academy. However, after returning to Pretoria shortly after the May 1902 peace, and completing a last year at school on Esselen Street, the teenage Pierneef was expected to make a living. Despite committing in his own mind to becoming an artist, as a result of his father’s investment in Lodewijk de Jager & Co., the tobacconist on Church Street West, he had little option but to take up a position there late in 1906. Mischievous anecdotes from JFW Grosskopf and PG Nel, the artist’s first biographers, suggest that he was frustrated by his employment, and that he would at the first opportunity neglect his retail duties for his pencils and brushes. A now famous photograph, moreover, of a boyish Pierneef outside the shop, shows him wearing an expression of some displeasure. Yet the image of a bored, wantaway young artist, holed-up or hiding in a tobacconist’s, drawing carefully, and no doubt delighting in the ordered stock around him, has become part of Pierneef lore.

Few drawings then will thrill and delight Pierneef collectors as much as these three interior vignettes from 1906 and 1907. The three-part lot includes a delicate pencil sketch and two spectacular, vivid watercolours: one showing the ordered, lime-green interior of Lodewijk de Jager’s tobacco shop, with its oriental jars, its carved counter and set of scales, its exotic cigar boxes, and its ornate display cabinets stocking African and European pipes; the other the back storeroom, complete with sturdy shelving, no-frills lighting and a double delivery door, but bedecked with branded cartons neatly stacked like rows of brilliant, sharp-edged, coloured bricks. The drawings catch a young man wrestling with a sense of responsibility and his desire to spend his time painting; they offer the only full-colour glimpse of the moment. The group of drawings are not only of great historical significance, and a wonderful, unique piece of Pretoriana, but they also provide the most charming evidence of the artist’s early gifts and his youthful self-confidence.

3. JFW Grosskopf (1947). Pierneef: The Man and His Work, Pretoria: Van Schaik, illustrated in black and white on page 10. 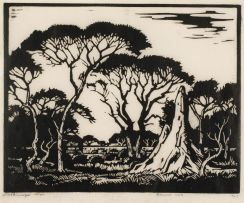 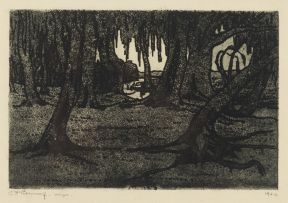 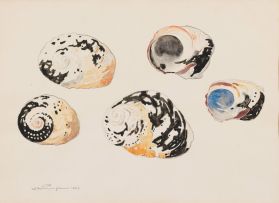 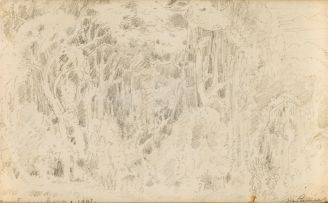 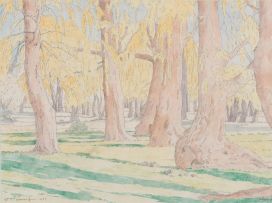 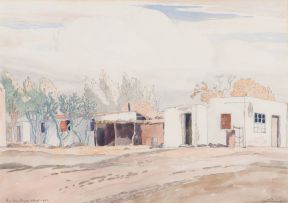