The artist was the 1978 winner of Absa L’Atelier Art Competition, worked in a studio at the Cité Internationale des Arts, Paris.

Bluff, Again was started in the late 1980s and completed this year, 2019. On a recent visit to Durban, walking around the sites where I used to draw I was struck by the continuity of my interest in land. The central concern of these works, the relationship of settlers to land, has persisted. When I moved to Johannesburg I no longer had the ocean to work with. Instead I became interested in the underneath, the landscapes below the ground, which have marked so much of our country’s history. When I lived in Durban I was particularly interested in the edges of the city, most enduringly the harbour entrance, positioned in the shadow of the Bluff. These are somewhat melancholy works. Great pieces of land rise precariously from the ocean with architectural fragments clinging to them. One can recognise bits of Victorian fretwork, but also what could be defensive walls. The land is stripped and the earth has been dug for leisure and commerce.
Clive van den Berg 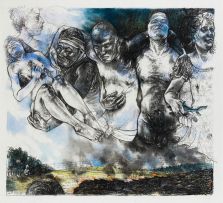 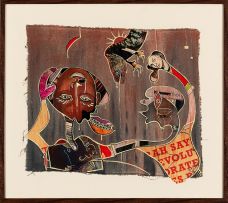 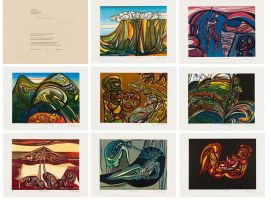 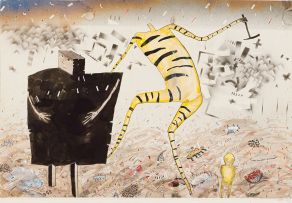