Walter Battiss
South African 1906-1982
Le Déjeuner sur l'Herbe
signed, inscribed with the title in part on a Michael Stevenson Gallery label on the reverse
oil on canvas
41 by 50,5cm excluding frame; 56 by 66 by 4cm including frame

In broad overview, French impressionism and German expressionism exerted the greatest influence on progressive South African painters in the earlier twentieth-century. As is evident from this late-career work by Walter Battiss, an effortless reimagining of Édouard Manet’s well-known picnic scene, Le Déjeuner sur l'herbe (1862-63), his allegiance remained steadfastly Gallic throughout his life. This assertion requires qualification. As a young artist Battiss revered post-impressionists like Paul Cézanne and Vincent van Gogh. In 1938, at age 32, he travelled abroad for the first time. His itinerary included a stopover in Paris. Painted shortly after his return home in a shock of insight, The Early Men (1938) announced his “break” with impressionism in favour of a style more directly influenced by South Africa’s early rock artists.1

This posthumously announced divorce was never total. The subject of The Early Men, four naked figures in a landscape, reiterated a stock motif of classical and early modernist European painting: undressed bodies at leisure in nature. Battiss would return to this subject throughout his many stylistic periods. Works like The Early Men, Figures and Rocks (c.1940) and Boys’ Swimming Pool (1948-49) prefigure his late-career reinterpretations of Manet’s Le Déjeuner. Battiss produced two nearly contemporaneous variations of Manet’s work. Also undated, Le Déjeuner, Millionaire with Two Nubile Girls similarly depicts three naked figures in a woodland setting using the same casual brush style. This lot more directly riffs on Manet’s original, particularly in the arrangement of figures. Most likely painted in the mid to late 1970s, when the hues of his palette softened, the work is an expression of the artist’s lifelong vision of harmonious coexistence.

More than just a reiteration of Manet, Battiss used the work of an esteemed precursor to declare his break with tradition. In her 1971 book Realism, a study of later nineteenth-century French painting, art historian Linda Nochlin describes Manet’s Le Déjeuner as a “straight-faced juxtaposition of classical elevation and contemporary banality” in which the cosmopolitan picnic presents itself as a juncture of “eternal nature and transitory worldly fashion”.2 Battiss, who abjured “the hot wheel of civilisation,” rarely explored metropolitan insecurities in his work.3 His art as a whole is the expression of a sensualist who paused to appreciate the scent of grass, of leaves, of rocks, who celebrated sunbathing and nudism, and whose euphoric bush wanderings in the presence of “birds and fearless animals” offered him an opportunity, as he wrote in 1965, to encounter “the world as it was a million years ago”.4

It bears noting that Le Déjeuner, besides being much debated has also been frequently imitated and parodied. In 1978, roughly the time period out which this work originated, Neville Dubow, a friend and work colleague of Battiss, produced a sequence of eight black and white photographs based on Manet’s painting, titled Déjeuner Variations 2, Reductive Luncheon. Like Battiss, Dubow also undressed the notoriously clothed male protagonist in the foreground of Le Déjeuner.

Acquired directly from the artist by Linda Givon, Goodman Gallery. 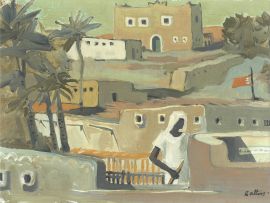 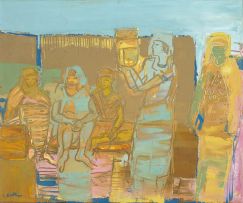 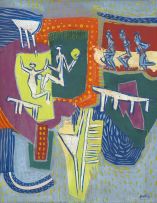 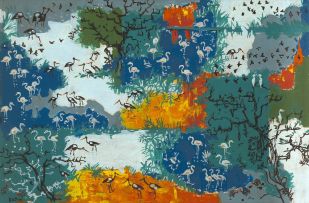 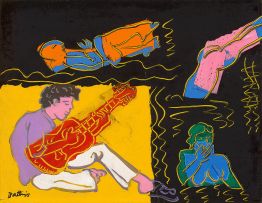 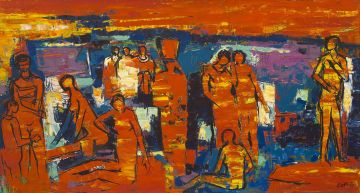