In the 1950s, Irma Stern was in the mood for experimentation. Perhaps this was brought about by regular exposure to the continent of Europe which she had so longed for during the isolating years of the war.

In 1950 she exhibited at the Venice Biennale, and this exposure, together with the visits to Europe that followed, bear testimony to this desire to create a new mood in her work.

A greater tend to abstraction and a calligraphic use of the brush, with areas of the canvas played up and down, in texture and painterly weight, are characteristics of this time.  This work portrays these aspects to an excellent degree, with the mysterious spaces in the background forming a dramatic contrast to the sensuality of the foreground.

The distortion of form, in this case of one of her favourite Luba figures, is brutally realised with a vertical downward thrust to the supporting arm. The luscious split paw paw in a bowl adjoining the figure makes a dizzying organic statement which successfully celebrates the female form. The mysterious orange and green content of the supported bowl are either decorative or edible or both.

In the early 1950s the artist painted several works focused on this Luba figure as well as the now famous Luba caryatid stool by the Master of Buli, a region of South East Congo made famous by this master carver of the late 19th, early 20th century.

These works, together with works featuring the masks from her Congolese collection, are formally realised with fruit and flowers and foliage, creating dramatic compositions which speak to the mystery and drama of the objects.

The Luba figure depicted here is in the Irma Stern Trust collection in the UCT Irma Stern Museum.

A gouache figure study of 1948, Nude with Still Life, in the Irma Stern Trust collection features this Luba item with a nude female model.  The characteristic presence of fruit is central to the theme.  The model and the figure are aligned in mood and form.

In the Iziko South African National Gallery collection we can see the masterful Arum Lilies, 1951, oil on canvas, which features the figure superbly enhanced by arum lilies and fruit.

Irma Stern was to make a third and final trip to the Congo in 1955.

Portraits and figure studies of this period are heavily influenced by the masks which she brought back, and which can be seen in the passage of the Museum where they were displayed in her day. 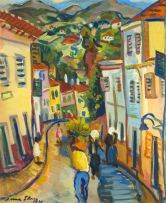 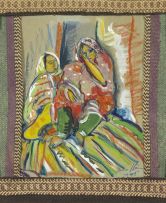 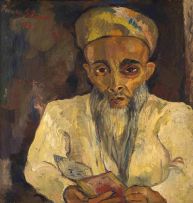 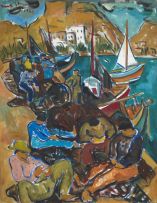 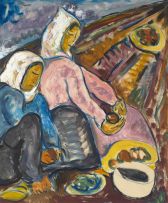 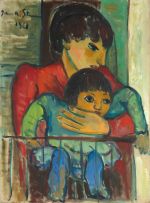