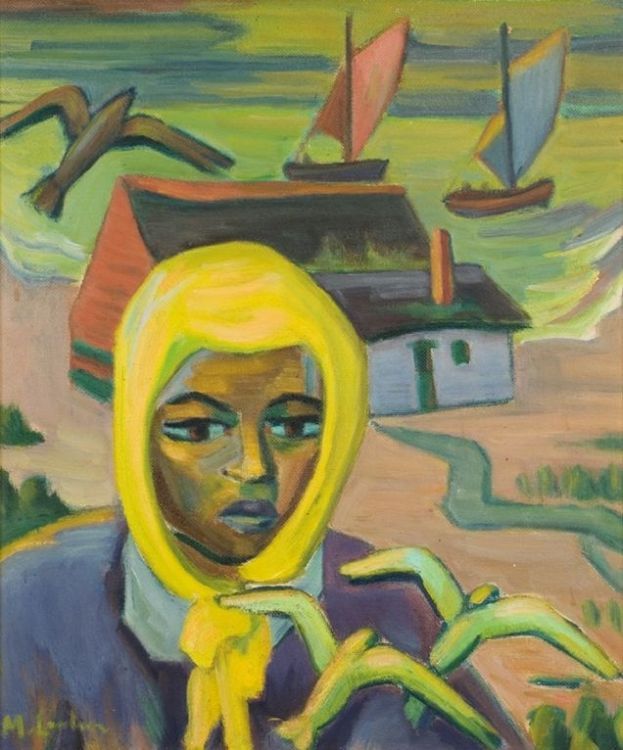 Maggie Laubser
South African 1886-1973
Portrait of a Woman; Landscape with Birds, Houses and Boats in the Background
signed
oil on board
48 by 40,5cm excluding frame

Portrait of a Woman; Landscape with Birds, Houses and Boats in the Background was included in Maggie Laubser’s Prestige Retrospective Exhibition that toured to the South African National Gallery, Cape Town; the Pretoria Art Museum and the Johannesburg Art Gallery in 1969. It also features in Dalene Marais’ catalogue raisonné in the section headed ‘South Africa. The established Artist. Abstraction and Consolidation CA 1950 – 1973’.i

At this stage Laubser was settled in her home ‘Altyd Lig’ in the Strand. Her career was firmly established, she was honoured in various major exhibitions and tributes were pouring in: her paintings featured in the Overseas Exhibition of South African Art at the Tate Gallery, London in 1948, the Venice Biennale in 1953 as well as in numerous local and international touring exhibitions. The South African Academy for Science and Art had awarded her a Medal of Honour for Painting in 1946 and made her an Honorary Member in 1968.

The motifs in these later works included many of her favourites such as Langebaan and the adjacent coastal areas, of which this painting could be one. As Marais points out, while these motifs are recalled from memory, they are still related to observed reality. However, details are reduced in order to focus on the essence of the scene and its capacity to convey her emotional attachment to the subject.

Maggie Laubser’s empathy with those who lived close to their sources of income and to their sustenance is legendary. This woman, shielded from the elements by her yellow scarf, could well be waiting on the shore for the fishing boats, a conjecture supported by the presence of many seagulls. Heightened colour and strong outlines create rhythmic patterns across the composition that emphasise the simple, yet most vital, elements of life. The dynamic shapes of the birds in the foreground are echoed in the path leading to the house while the flight path of the bird at the top left accentuates the billowing sails on the horizon that are bringing the boats in.

Dr. and Mrs. A. H. Smith, Johannesburg, acquired directly from the artist. 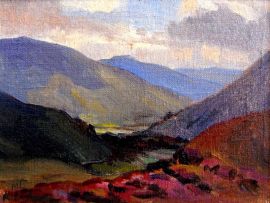 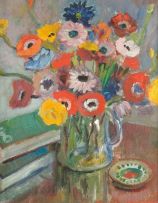 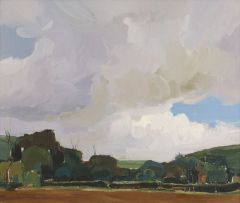 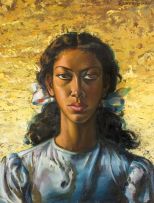 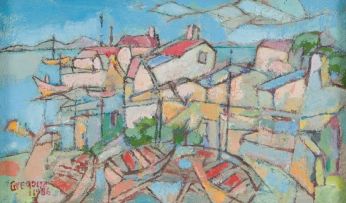