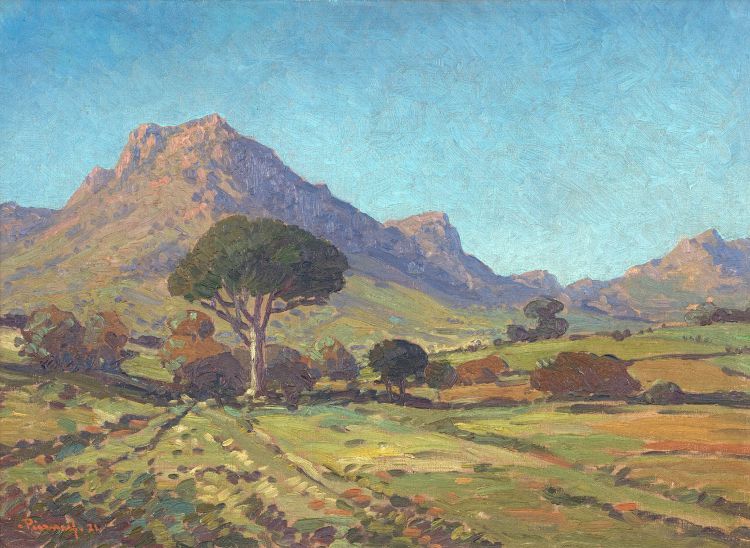 Claude Monet’s extensive collection of Japanese woodblock prints still hangs in the dining room of his house at Giverny, in France. The artists of “The Floating World”, as the Japanese woodblock printers are often called, had had a profound influence of the manner in which Monet composed his landscapes, creating a veritable bird’s-eye view of the French countryside.

George Smithard introduced J H Pierneef to Japanese woodblock prints when he showed the young artist the ropes of the linocut technique. Not only did these prints influence Pierneef’s own linocuts, they also set the tone for many of the compositions of his varied and extensive landscapes.

In the present lot Pierneef seems to invite the viewer to ‘’dive’’ into the foreground of this Cape winelands scene, ending up in the middle ground among a clump of trees, only to be challenged to scale the mountains in the background - truly a roller coaster ride! The perception of this landscape is that of great movement, of virile animation.

In addition, the viewer is seemingly also given the choice of angle from which to approach this flight: pathways are suggested in the three diagonals in the foreground: one on the left, another at the centre, in the form of a ploughed furrow, and a third on the right in the form of a green thicket along what appears to be a stream.

Beyond the trees these pathways seem to refract again but now in the opposite direction. In addition, the silhouette of the mountain range in the background has its own network of diagonals.

Pierneef rejoiced in painting the farms in the Stellenbosch valley. He often visited the town, exhibiting in the local Town Hall in 1921, and staying with JFW Grosskopf, who wrote the very first Pierneef biography, published in 1945. Pierneef exhibited the same suite of paintings in the Ashbey Hall, Long Street, Cape Town, in October 1921. Praising Pierneef, Die Burger stated that”…many people were amazed to see how successfully the painter captures the vastness and mystery of the African plains and mountains and friendly old farmhouse.  Pierneef can be very proud of himself. He has given the people of the Cape something new and they have appreciated it.” 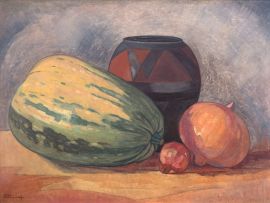 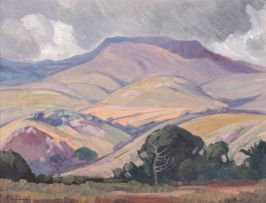 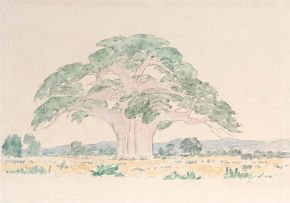 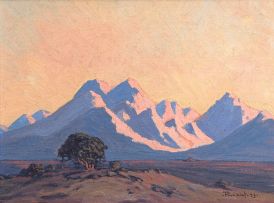 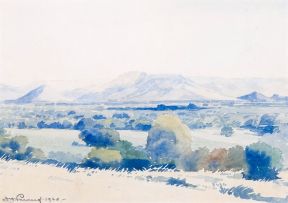 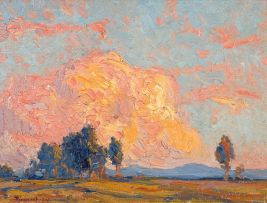