Gerard Sekoto
South African 1913-1993
Saturday Afternoon
signed; numbered 11, inscribed with the title and further inscribed '(For Kerifa) "New Group" Exhibition' on the reverse, a Schweickerdt gallery label, a label printed with the artist's name and 'Location Scene' and label indistinctly inscribed 'Christi's' adhered to the reverse
oil on canvasboard
29 by 39cm excluding frame

In 1945, after a lengthy stay in Cape Town, Gerard Sekoto moved to Pretoria to live with his mother and stepfather in Eastwood. The two years he spent in this settlement before his departure for France, via London, represent the highpoint of his artistic career. Already attuned to describing aspects of black urban life following creative sojourns in Sophiatown and District Six, Sekoto concentrated on producing gregarious studies of domestic life marked by their formal innovation and painterly maturity. “It was a time when he pushed his understanding of colour and form to new heights, when he seemed to sharpen even further his already remarkable sense of mood and movement,” notes Lesley Spiro.1 This lot is exemplary.

Dominated by the mustard tones in the foreground, Sekoto’s palette is sensuous rather than exuberant, his brushwork attentive without being overly precise. Despite his naturalistic approach, elements of his painting remain mysterious. For instance, the identity of the two male cyclists wearing hats is hidden in shadow. Similar to Sixpence a Door (1946), a comparably toned work from the same period, Sekoto imbues this study of quotidian life with a warm glow. Sekoto’s frontal vantage, which places him on the dirt road, immersed in the comings and goings of Eastwood, bears notice. It distinguishes this lot from a better-known earlier work, Cyclists in Sophiatown (1942), in which Sekoto described the hurried, mechanistic quality of township life by portraying a group of male cyclists from a removed vantage.

Like Sixpence a Door, this lot is historically important for what it portrays. Established in 1905 on the farm Garstfontein No. 428, Eastwood originally constituted 166 freehold lots and a borehole. In 1938, a committee chaired by EN Thornton was appointed to consider the administration of peri-urban settlements like Eastwood, which provided accommodation to black urban migrants just outside municipal boundaries. Conditions in Eastwood, it was reported, were “comparatively satisfactory", although the settlement was becoming overcrowded due to an increasing number of plotholders letting rooms.2 Water supply was also stressed. Sekoto’s painting does not portray these social pressures, which escalated after his departure – and culminated in forcible evictions and Eastwood being declared a 'white area' on 20 October 1961, the change signed into law by PW Botha.

Eastwood’s erasure wasn’t yet known when Sekoto first exhibited this work at Christiaan 'Christi' Truter’s eponymous gallery, most likely in 1947. A former lover of Alexis Preller, Truter opened Christi’s Gallery in 1946. His inaugural group exhibition included work by Sekoto. In April 1947 Sekoto held a successful solo exhibition at Christi’s and in July participated in a New Group show at dealer Joan Ginsberg’s Gainsborough Galleries, where this work was also shown. In September he left South Africa on the Carnarvon Castle, never to return. 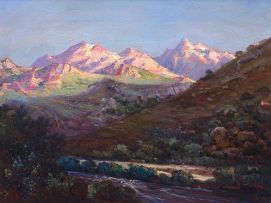 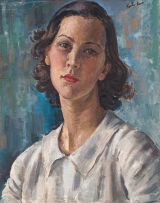 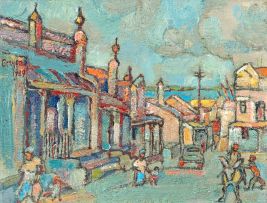 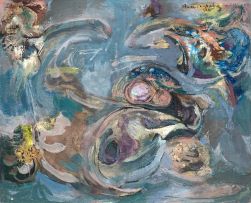 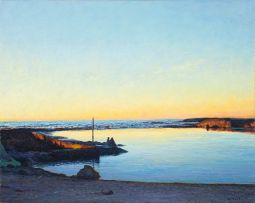