I am delighted to report that 2017 proved to be an extremely busy and highly successful year for Strauss & Co.

The company managed to build and expand on the solid base established in the second half of 2016, a year that started traumatically and posed many challenges.

We benefited from having a stable, dedicated and highly experienced team on hand throughout 2017 and put that energy to productive use by holding a record of nine auctions, a tally that included four live and five online auctions.

If one looks at 2017 in financial terms, several records were achieved. Auction turnover smashed last year's record of R215 million by R105 million or 49%, to achieve a very credible total of R329 million. We had our best sale yet, when the June sale in Johannesburg realised R90 million, a benchmark we are justifiably proud of.

In the event, more records were broken when we achieved a value sell-through rate of 95,8%, selling Pierneef's magnificent Farm Jonkershoek with Twin Peaks Beyond for R20 462 400. This is a world record for the artist and the second highest price ever achieved for a painting sold at auction in South Africa, a record that Strauss & Co already holds for the sale of Irma Stern's Two Arabs at R21 166 000.

During a year in which we established several new auction records for a wide variety of artists, a particular highlight was the sale of John Meyer's Odysseus for R3 069 360 with fierce bidding demonstrating the buoyant demand for this popular artist's work.

We are particularly pleased that Strauss & Co has consistently presented works that have never before been sold at auction or had been considered lost, as was the case in respect of important works by Alexis Preller and Sydney Kumalo.

In November 2016 we presented Preller's life size rendition of the biblical first man Adam, a rare intaglio and oil on fibreglass together with five other works by Preller that had never been offered at auction before, all of which sold above mid-estimate. We were privileged to follow that up this November with the provocative and sensitive Fleurs du Mal, painted in 1944, which achieved R8 184 960.

Handling such rare works in conjunction with the sale of Kumalo's Madala VI, a single edition from this highly acclaimed series, Gerard Sekoto's Women in the Country from the artist's golden Eastwood period and two extremely rare landscapes from Moses Tladi, not only provided excitement in the saleroom but also brought joy and fulfilment to our team.

In the past 18 months we have been entrusted by overseas clients with outstanding works by key South African artists such as Preller, Stern, Battiss, Kentridge and Kumalo. Without exception we have been successful in selling these either within or above our pre-sale estimates, demonstrating that Strauss & Co is ideally positioned, relative to its international and local peers, to achieve excellent results for high quality works. This is supported by the fact that the average sale price for the top 40 works sold during the year was approximately R4 million per item.

During the year under review, we sold 3 797 items on behalf of our clients and achieved a value sell-through rate in excess of 80% on average, a statistic that sets us apart from our local and international competitors. The sale prices achieved on auction corresponded almost 100% to our mid pre-auction estimates, which illustrates the quality and experience of our specialists in providing accurate estimates. Both these criteria remain a key guiding force for us in terms of conducting our business in an ethical, transparent, efficient and sustainable manner.

Our pioneering online-only auctions have proved to be a fast growing and increasingly significant component of our business and the November online auction set a new record turnover of R4,2 million. These have been very beneficial in introducing new clients to the market and Strauss & Co remains committed to keeping works on this platform accessible and affordable to first time buyers.

Southern African art has never been better positioned to become a more meaningful force globally and at Strauss & Co we recognize and accept our responsibility in terms of the development and strengthening of our art ecosystem. Our efforts are focused on art education, supporting art institutions and creating a greater local and international awareness, understanding and admiration of Southern African artists, past and present.

During 2017 we aimed at creating international awareness by supporting the Friends of the South African Pavilion at La Biennale di Venezia financially and attending the Africa Art Forum in Venice.

Strauss & Co also became a corporate founding member of the Zeitz MOCAA in Cape Town and strongly believes that the museum can play a constructive role in bringing art lovers and collectors to South Africa by exposing them to the incredible potential and talent of African artists. Together with the Norval Foundation's museum at Steenberg due to open early in 2018, the A4 Art Foundation and established museums such as the Irma Stern Museum and Iziko Museums, Cape Town is particularly well placed to present visitors with an exciting and in depth view of the development of our art and artists.

We deepened our involvement with the Irma Stern museum by hosting functions both in Johannesburg and Cape Town to launch Prof Sandra Klopper's new book on Irma Stern titled Are you still alive?. It was a pleasure and honour to host Mona Berman at these occasions and to hear her talk about her mother, Freda Feldman's life and relationship with Irma Stern. Strauss & Co was honoured to be entrusted with the sale of three paintings by Irma Stern of Freda Feldman, Freda Feldman in a Basotho Hat, Freda in a Khaki Dress and Freda with Roses and we are delighted that these poignant and important works found new homes.

Our partnership with the Friends of Welgemeend and The Boerneef Collection, has developed over four years into a Welgemeend Art Month and this year we saw a three-month exhibition titled South African Abstract Art from the 1950's to the 1970's in conjunction with noted collector, Pieter Colyn. In the process, we have been instrumental in not only renovating the third oldest homestead in South Africa and turning it into a high-end exhibition and conference venue that houses the Boerneef Collection, but also enabled a great many pupils from various schools and local and international visitors to engage with art in a quiet and contemplative setting.

In Johannesburg, Strauss & Co strengthened its relationship with the Turbine Art Fair by presenting an exhibition of an extract from the Taljaard collection of works by JH Pierneef. We also held an online auction concurrently with many of the works being exhibited at the Fair. Both events proved to be very popular and Strauss & Co has committed itself longterm to the Fair.

We are committed to expanding the local market's knowledge of our artists and during the year hosted several lectures across the country giving our clients deeper insight into the works of Preller, Pierneef, Stern, Battiss, Esther Mahlangu, South Africa's abstract artists of 1950 to 1970 and the Natal School, amongst others. These events have proven to be very successful and popular and I should like to thank the members of staff who lectured as well as the guest lecturers including the indefatiguable Prof Karel Nel, Warren Siebrits, Prof Federico Freschi and Sean O'Toole, amongst others.

We once again sponsored the Cassirer Welz Award in conjunction with The Everard Read Gallery and the Bag Factory Artist's Studios, which award this year went to Richard ÒSpecsÓ Ndimande. We trust that the opportunity to spend ten weeks at the Bag Factory studio and have the resultant works exhibited at The Everard Read Gallery, will inspire and launch a career such as that of Blessing Ngobeni, a previous winner.

Hosting the launch of the book Walter Battiss I invented myself, The Jack M Ginsberg Collection, edited by Warren Siebrits, at our Johannesburg offices was another highlight and a fitting tribute to Battiss, the collector and the editor.

I hope that you will agree that it was indeed a very busy, exciting and successful year on many levels. None of this would have been possible without a highly competent team, working together in a passionate and focused manner, loving what they do and interacting with you, our clients.

We are very proud that, notwithstanding a most demanding schedule, two of our team members, Alastair Meredith and Gera de Villiers, still managed to obtain their doctorates from Cambridge and the University of Stellenbosch respectively. Well done indeed!

We are delighted that Susie Goodman was awarded the Ampersand Foundation Residency for 2018 and believe she will benefit greatly from spending a month in New York, especially during the New York auction season.

My final thanks to my fellow board members for their wisdom, unstinting support and belief in the company, and to you, our clients without whom none of this would be possible.

There can be no doubt that 2018 will be a challenging year given the state of the economy, pressure on disposable income, corporate failures and political uncertainty. We believe that we have laid the foundations to weather these challenges and will continue to expand our operations. The launch of our first contemporary art auction to be held on Saturday 17 February during the Cape Town Art Fair, heralds an exciting new direction for Strauss & Co and should, in time, further enhance our relevance and sustainability. 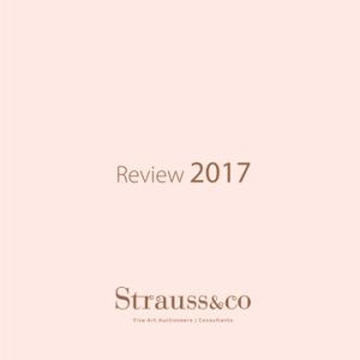