2015 ended on a deeply sad note for Strauss & Co with the sudden death on Christmas day of Stephan Welz, following a short illness. He was one of the founding directors of Strauss & Co and embodied all that the company stands for: integrity, honesty and professionalism. Stephan's extensive knowledge of the South African art market has enabled the company to grow exponentially and achieve the success it has justifiably enjoyed. With Stephan at the helm of his hand-picked and committed team of experts, the company has gone from strength to strength, achieving many new auction records. The resultant rise in the South African art market has been nothing short of meteoric.

Stephan will be deeply mourned by all of us. His foresight in creating a legacy of unparalleled experience, a repository of priceless knowledge and a unique cultural ethos will ensure that his successors will be inspired and equipped to continue to drive the company onwards and upwards.

The total shows an increase of 16.83% from last year and a sell-through rate by lot and value combined of 81,7%, once again the highest in the current market. Sales figures were driven by strong interest in top quality items across all the categories that Strauss & Co auctions: art, furniture, decorative arts and jewellery. The top end of the market remained strong as evidenced by the number of lots that sold above R1 million (28 in all). For a team of under twenty, these results are indeed most impressive!

Said Stephan Welz, "The results for 2015 confirm the strength of the South African art market. There is an undeniable appetite for high quality art that represents the best examples of an artist's work."

Our four live auctions held yearly, two in Johannesburg and two in Cape Town, have become fixtures on the global South African art circuit providing the perfect opportunities for new and seasoned collectors. Our focus remains on serving our clients whenever and however they choose to connect with art, through auctions, previews, special events or online.

In my very first report in 2009, I stated that Strauss & Co had not only "become a name that speaks of extraordinary art, as well as unparalleled expertise and service, but that it is also by turnover the largest fine art auction house in South Africa." I am delighted to be able to attest, seven years later, that we still retain our position at the forefront of the South African art auction market - no mean feat in this competitive market.

Never has the dictum 'South African art performs best in South Africa' been more true. With the weakening in the South African rand and Strauss & Co's commission rates, which are still the lowest in the business, our company is the most competitive in the current auction market.

This year we set 21 new artist records – the most we have ever achieved – and interestingly the majority are for modern and contemporary artists. On pages 6-9 (of the review) we list our new records together with the existing records held by Strauss & Co. We also achieved a South African record for furniture, breaking two of our previously held records.

We take great care in monitoring the performance of the many artists we handle each year and are proud of the high sold rate percentages achieved. We continue to lead the South African art market by offering a broad spectrum of artists, thereby widening opportunities for collectors.

Of the South African masters, works by Pierneef and Irma Stern continue to headline our sales, achieving impressive results and high percentage sell-through rates – in 2015 94,4% and 87,5% respectively. This year Anton van Wouw and Alexis Preller dominated the salerooms. All four of the works by Van Wouw sold and a new record was achieved for Miner with Hand Drill which, after competitive bidding, was sold for a record R4 774 560, more than double the previous record set by us in 2013. Two major works by Preller, The Creation of Adam I and Apollo Kouros II, performed extremely well selling for R8 526 000 (the highest price ever achieved at auction for Preller in South Africa), and R5 456 640 respectively. Other records achieved include Penny Siopis, Robert Hodgins, Erik Laubscher, Deborah Bell, Norman Catherine, Walter Oltmann and Ed Young, to name a few. Strong prices were also achieved for international artists. A painting by the celebrated Dutch artist, Kees van Dongen, of his beloved daughter, Dolly, headed the June sale selling for R5 684 000. Schmerzensmann III, a powerful reflection on humanity by Belgian artist Berlinde De Bruyckere, sold for R3 410 400.

Perhaps the biggest surprise of the year was the sale of a sculpture by the relatively unknown South African-born sculptor, Ernest Mancoba. Born in South Africa in 1904, he left for Paris in 1938 never to return. As this was the first of his sculptures to be sold at auction in South Africa, the work, Musician, depicting a figure playing a skapu, had initially been valued at R70 000. The South African art buying public was justifiably astounded when it sold for a massive R613 872 in June.

Strauss holds four online auctions a year that have proved to be exciting for both new and seasoned collectors. These auctions feature affordable and quality fine and decorative arts and are particularly attractive to new collectors.

New appointment to the board

I am delighted that Caro Wiese has joined the Strauss & Co board as shareholder and non-executive director. We have known Caro for many years both privately and professionally. She is a seasoned and passionate art collector with a discerning eye. We warmly welcome Caro and look forward to working with her in the years to come (see article on page 118 (of the review)).

The middle market stands its ground

The name Strauss & Co is generally synonymous with fine art, but there is another equally interesting facet to our business in the form of the decorative arts. Strauss & Co's Cape Town salerooms have featured some spectacular pieces since the company's inception. An important 18th century Regence ormulu-mounted rosewood commode which was formerly housed at Vergelegen, made headline news this year when it sold for R2,5 million, over 10 times its pre-sale estimate. Oriental ceramics and works of art continue to command high prices as does Cape and English silver.

This year Stephan was asked to conduct a lecture to raise funds for the Friends of the SA National Gallery. As it was during the time that the Irma Stern exhibition Brushing up on Stern was being held at the Gallery, this seemed the obvious choice of subject. However, since so much has already been said on Irma Stern, he decided instead to focus on collectors and chose The Important Role Played by the Jewish Community in South Africa with Particular Reference to the Visual Arts and Cultural History. This informative lecture was so well received and successful that Stephan in his indomitable style delivered it on two further occasions, finally at the Jewish Museum in Cape Town in November.

Strauss & Co will uphold Stephan's legacy and we look forward to seeing you in our auction rooms in the coming year. 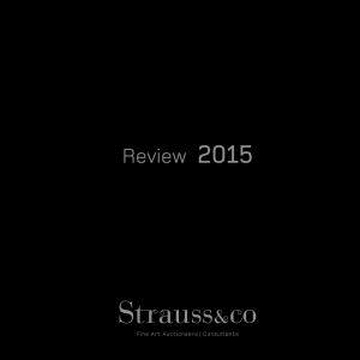