It is impossible to predict what will happen in the future, but the last six years have been remarkable in the history of the South African art market and Strauss & Co has undoubtedly played a significant role.

Overall Strauss & Co achieved its third highest turnover last year totalling R180 million. Herein reside some remarkable achievements: an increase of 6% of total market share, taking Strauss & Co’s portion to 52.2%; exceptionally high sell-through rates for major South African artists – for example, Irma Stern (88.23%), JH Pierneef (78.57%) and William Kentridge (86.36%); fifteen artists achieving a 100% sell-through rate; and nine new artists’ records. This is indeed impressive, but what lies behind these facts is a remarkable principle – the confidence in our standard of service and the integrity that has underpinned our business since its inception.

The art market, like any other, is aff ected by the strength or weakness of the economy. However, despite this the demand for high quality works with respected provenance continues to appreciate. Strauss & Co’s clients are, and will continue to be, well placed to benefit from this.

Last year we off ered many outstanding works of art from distinguished private collections. The Harry Lits Collection in Johannesburg was undoubtedly the highlight of the year. This landmark sale will long be remembered for its beauty and historical signifi cance, considerably enhancing the Amadlozi Group’s stature within South African art. Not only did the sale produce a pleasingly high total for a single-owner collection, doubling its presale expectation, it also took the value of works by Ezrom Legae, Sydney Kumalo, Edoardo Villa and Cecil Skotnes to new heights. The saleroom was packed, ablaze with energy and rapturous applause as one lot after the other sold significantly above pre-sale estimate. We were honoured by the presence of the esteemed Harry Lits himself, and also by Egon Guenther, founder of the Amadlozi Group and close friend and advisor to Harry Lits, who, despite ailing health, could not bear to miss such an event, was seated in the front row with his family. Also worth noting was the sale of the estate of the late Diana Stuttaford-Burton which featured her impressive collection of South African and international paintings, furniture and works of art.

Life at Strauss & Co is never static – each year has its own fl avour and character, as is obvious to anyone who looks at previous Reviews. Fittingly, this issue documents the many developments that unfolded during 2014 in our offices and salerooms in Johannesburg and Cape Town.

South African art continues to beguile the public eye, achieving consistently high prices for outstanding works. JH Pierneef stole the show in 2014 with 22 out of 28 works sold, including a record price achieved for a resplendent landscape from what is generally accepted to be his best period of production. Titled An Extensive View of Farmlands – a surprise late entry to the November auction – it fetched an extraordinary R11 936 400. The outstanding performance for a selection of 35 top selling South African artists, as shown on the table on page 8, is particularly reassuring to collectors and owners of high quality South African art. A study conducted by Professor Johannes Fedderke, Director of Economic Research South Africa and Professor at Pennsylvania State University, praised the estimates provided by Strauss & Co that are neither seller-driven nor pitched at unrealistically high levels to ensure a consignment over a competitor. Instead, Strauss & Co assigns estimates that are precedent and market related, thus accounting for our high sellthrough rate across the board, including the broadest range of South African artists. Prof Fedderke’s research also confirms Strauss & Co as the market leader by a significant margin, despite what others might claim.

We are excited to note that the demand for Contemporary Art in South Africa is on the rise. Strauss & Co is ideally positioned to continue nurturing this growing trend, thereby strengthening the secondary market which, in turn, contributes to the confidence in the primary market.

With the advent of Strauss Online in November 2013, last year saw a consistent growth in confidence, bidding and increasingly good prices achieved on this platform over the three sales that we held. This platform continues to broaden the market and make high quality fi ne and decorative arts and collectibles available to an ever-expanding pool of established and burgeoning collectors.

Things are looking up and Strauss & Co will strive, as always, to offer superlative service to those who buy or sell with us. Over the past year hundreds of people have passed through our doors, some sellers, some buyers, or merely visitors who come to marvel at the supreme quality pieces that Strauss & Co consistently handles. None of this would have been possible – the volume, the variety, the quality of the business (some of which is reflected in the pages of this Review) – without our expert, dedicated and hard-working staff to whom I express my sincere thanks. It is this remarkable team that has made this yet another highly successful year and Strauss & Co such an enjoyable company in which to work.

As we look forward to the coming year, we hope that readers will enjoy the delights that follow in this Review and join us in our salerooms and offices in Johannesburg and Cape Town to participate in the exciting season that lies ahead. 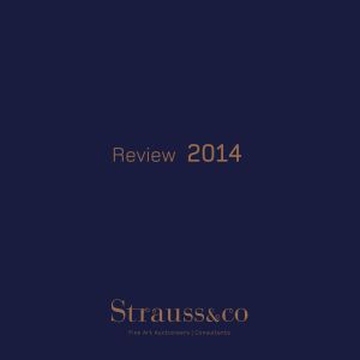