As South Africa’s leading auction house of fine and decorative arts, our goal is to offer for sale at auction high quality, unique and fresh to the market pieces at responsible estimates and with impeccable provenance. Our sustained commitment to provide our clients, both buyers and sellers, with the best possible service is of paramount importance and we are grateful to have been rewarded by their continued support.

2013 has been a busy and proactive year. Between our live auctions, our new online-only auctions and the numerous fundraising events in which we have been involved, we have processed well over 3000 lots. Bringing our online auction platform to fruition was an intense undertaking, but it was well worth it and the teething problems we experienced are currently being addressed. We are now focused on sourcing artworks for our 2014 auctions, the first of which will be in March.

We are well into our fifth year of operation and the Strauss & Co journey has been interesting, challenging and most rewarding. Our sales have grown in size, our departments have strengthened and our team of hard-working professionals, headed by Stephan Welz, continues to achieve results of which we are justifiably proud. Packed salerooms characterise our auctions, and 2013 was no exception. We are encouraged by our turnover of R183 million for the year, being the second highest since we opened and showing an increase of 19,3% compared to 2012. The overall sell-through rate, unique to Strauss & Co, stands at 82%. Despite the weak rand and other negative external influences, Strauss & Co has maintained its major share in the South African art market.

New world records were achieved this year for celebrated artists Wolf Kibel, Gwelo Goodman, Jane Alexander and Penny Siopis. Wolf Kibel’s relatively unknown Houses with Red Roofs went through the proverbial roof by more than doubling the previous auction record for his Self Portrait which was set by Strauss & Co in 2009. R668 400 was paid for a pastel drawing by Penny Siopis, titled Imaging, which realised 300 times its presale estimate! Gwelo Goodman’s impressionistic gem Dawn on Table Mountain also set a new record for the artist.

History was made in November when Jane Alexander’s important sculpture, Untitled, sold for an impressive R5,5 million setting a new record for a South African sculpture, a record for contemporary art in South Africa and a record for Jane Alexander. It soared above its presale estimate of R2-3 million as three buyers bid resolutely against each other until it was finally knocked down. The result is double the record for a South African sculpture previously held by Anton van Wouw, whose Bad News proved to be good news when it sold for R2,2 million in 2010 at Strauss & Co. Rapturous applause ensued celebrating this landmark moment for contemporary art in South Africa. Untitled is the companion piece to Alexander’s seminal Butcher Boys, widely considered the most popular acquisition in the Iziko South African National Gallery’s (SANG) collection in Cape Town. Stephan Welz, noted: “From the moment Untitled came through our doors, we knew it was going to generate tremendous interest. Works by Jane Alexander rarely appear at auction and it was a great privilege for Strauss & Co to handle a piece of such great quality and historical signifi cance.”

The furniture highlight of the year was undoubtedly the rare 18th century Vizagapatam ivory cabinet-on-stand which required the entire Strauss & Co staff force on the telephones, finally selling for R2 046 000 – the highest price paid for a piece of furniture sold at auction in South Africa. Having been in the same family for over 200 years, the owner parted with it with some reluctance, but fortunately the sum realised more than compensated and will go towards his children’s education. We were delighted to have eclipsed our previous record for Cape silver, having achieved R534 720 for a golf presentation cup by John Townsend.

Cape furniture made headlines repeatedly this year. We had the privilege of handling two important private Cape Collections, the Dr Bothma Buitendag Collection and the Dr Johan Bolt Collection, both of which sold exceptionally well showing a strong market for fine Cape pieces. This was further supported by the high price of R690 680 achieved for the important 18th century Cape West Coast cedarwood, pine and inlaid cupboard.

We have now held two successful sales at the Wanderers Club in Johannesburg and, having received positive feedback from our clients, we intend to continue at this venue.

Strauss & Co’s auction weeks in Cape Town have become permanent fixtures on the prestigious Vineyard Hotel calendar which hosts our sales in February/March and October.

After a long absence, 2013 saw Stephan’s return to the television screen in Antikwaar, a programme aired by Kyknet. Many viewers will remember his appearance in the popular series, Trommel, which ran some years ago. Once again, members of the public were invited to submit pieces for valuation which Stephan handled with his usual aplomb.

Continuing in the vein of international auction industry developments, this year we introduced Strauss Online, a solely online auction platform where all sales are time-limited (www.straussartonline.co.za). This industry advancing platform has been developed to nurture the broader art market and to make quality fine and decorative art works accessible to a wider market. Potential buyers and emerging collectors will have the benefit of being able to view and bid on sales from anywhere in the world. This is the first dedicated, exclusively online-only art and antiques auction website in South Africa and gives us the ability to host sales more regularly, thereby relieving clients of the lengthy wait between the four annual catalogue auctions.

With its focus on more affordable art, Strauss Online will reach an enormous audience of art appreciators, far more than would ever be able to view a live, physical auction. There has been a marked increase in virtual stores and online sales platforms globally. The online art trade 2013 showed that an increasing number of people are prepared to spend £50 000 or more on a single item online, without seeing it “in the flesh”. With the benefit of Strauss & Co’s principled reputation, superior standard of cataloguing and expertise, and the guarantee of quality and authenticity, research by ArtTactic corroborates that this product will indeed be highly successful, as trust and reputation, more than technology or pricing, are the primary driving forces behind online success. Recently TEFAF reported the value of the global art market at $56bn. ArtTactic estimates that online sales across all platforms for 2012 were $870m, and will rise to $2.1bn by 2017.1

Strauss & Co assisted the Friends of the National Gallery (FONG) with their attendance at this year’s FNB Johannesburg Art Fair. With most of our public museums and galleries faced with restricted budgets a selection of works donated to the South African National Gallery by the Friends was showcased. On loan from Strauss & Co was Jane Alexander’s, Untitled, which was of particular significance given its relevance to the Butcher Boys. It attracted a great deal of attention and by all accounts, was the star of the show.

Strauss & Co participated in Cape Town’s first Art Fair held in October at the V&A Waterfront. The original brief was that only items under R50 000 could be exhibited, so it was the perfect platform to launch Strauss Online. It was well organised, well attended and such a success that the second one has already been booked and will take place from 27 February to 2 March 2014. We are delighted to announce that we shall be there!

Fundraising Initiatives and other events

“The evening was a huge success – the R5,5 million raised is a fantastic start to our target of R25 million over the next five years – but in addition to the funds raised, the event generated an enormous amount of publicity and so raised a great deal of awareness of the museum, programming and vision. It also generated huge goodwill and lots of word of mouth ‘buzz’. All of these support our strategy and vision for the long-term growth of the museum.” Julia Charlton, Senior Curator, Wits Art Museum

Strauss & Co was honoured to have undertaken the sale of The Chris Levin Collection of vintage couture. Our commission of R31 000 was donated to the charity, Vintage with Love, an inspiring initiative to raise much-needed funds for illiteracy in our country. The Charity was the brainchild of Jacquie Myburgh and Leigh Ord. Eight garments from the sale were generously donated to the Iziko Museums Costume Collection by curator, art historian and philanthropist, Mark Coetzee.

Strauss & Co is delighted to have been a major sponsor of the 2013 Reinhold Cassirer Art Award. We wish the winner, Asanda Kupa, every success in his art career.

Strauss & Co published a photographic portfolio by internationally acclaimed photographer, Greg Marinovich, entitled Dead Zone 1990-1999. It comprises a selection of colour images from the hostel war era which preceded and followed South Africa’s transition to democracy that saw Nelson Mandela elected State President. This is the first time that many of these images will be seen in public. For a private viewing of the portfolio please contact Ruarc Peffers on 084 444 8004.

The inaugural Turbine Art Fair, the first accessible art fair of its kind in South Africa with a ceiling price of R25 000, took place at the Turbine Hall in the Newtown Cultural Precinct. Ruarc Peffers conducted lectures advising first time buyers on how to start their art collections. Twenty-eight contemporary galleries exhibited and over 3000 visitors came through the doors.

The World Wildlife Fund Art Auction, presented by Strauss & Co and Everard Read and under the patronage of Nicky Oppenheimer, raised close on R5 million at CIRCA gallery in Johannesburg: R3 780 000 was raised in the sale room plus another R1 000 000 donation from the sale of Adrian Steirn’s photograph of Nelson Mandela.

“We are delighted with the outcome of the auction and acknowledge that this would not have been so without the full commitment and expertise of you and your team. For that we are most grateful. As you know, there are many pressing conservation issues in South Africa that require urgent attention, from keeping our water catchments healthy to managing fish stocks, saving the rhino from extinction and purchasing critical conservation land, amongst other things. I can assure you that WWF maintains the highest standards of accountability and governance – perhaps unmatched in the NGO sector – and that we shall continue to put the funds that we raise for conservation to good use.” Dr Morné du Plessis, Chief Executive Officer, WWF-SA

Four groups of ABSA graduate trainees were set the task of raising the most money for various children’s charities. Strauss & Co were asked by Khotso Namane Maleke’s team to help run an art auction.

The total funds raised on the night were R386 680. Absa Retail and Business Banking will be adding a further R140 760, this takes the overall funds raised from the auction to R527 440. Of the four Syndicates Khotso’s team raised the highest amount.

Vladimir Tretchikoff ’s iconic work Chinese Girl has returned to our shores after 59 years thanks to Mr Laurence Graff . It will be on public view at his prestigious Delaire Graff Estate in Stellenbosch. Stephan Welz was invited to unveil the painting with Monika Pon-su-san, the beautiful model. He also took part in a panel discussion with Boris Gorelik, Tretchikoff ’s biographer, Riason Naidoo, director of SANG and Andrew Lamprecht, senior lecturer at Michaelis and curator of the Vladimir Tretchikoff Retrospective held at the SANG in 2011.

R805 000 was raised at an auction in aid of Diane who suffers from polycystic kidney disease and is in desperate need of a transplant.

Best wishes for the forthcoming year. I look forward to seeing you at our sales in 2014. 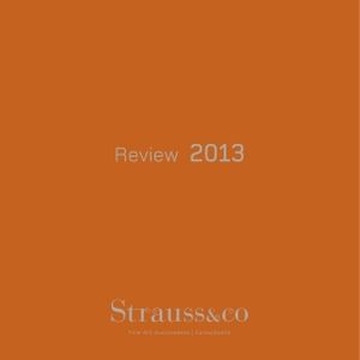