Our fourth year in operation is now behind us and it gives me great pleasure to announce that we continue to do very well.

Against the backdrop of a significant recession, our results for 2012 reaffirm Strauss & Co’s position at the forefront of the global South African art market, as we have gained an even greater portion of market share. Michael Coulson, financial journalist, comments “the most notable feature of the year was the switch in relative activity back from London to SA” ¹ pushing Strauss & Co’s share up to “within a decimal point of 50%“ ²

Our five auctions commanded a turnover of R153 344 452 generating excellent average sell-through rates for the year, namely 87.65% by value and 81.40% by lot. Numerous new artist records were established for, amongst others, Walter Battiss, Ezrom Legae, Alfred Thoba, Cecily Sash and Robert Hodgins. The middle market represented by jewellery, furniture and decorative arts also contributed significantly to the high turnover.

In a broad and growing market, where buyers demand expertise and scholarship, our auctions featured high quality properties across the wide spectrum of categories we handle. These were suitably priced, well researched, beautifully presented and effectively marketed.

Whilst major works by Irma Stern, the grande dame of South African art, contribute significantly to our turnover, there is a widening portfolio of leading South African artists that the market is seeking and that are commanding high prices and achieving world records. Exceptional works by Alexis Preller, Robert Hodgins, William Kentridge, Erik Laubscher, Walter Battiss, Ezrom Legae and Stanley Pinker, amongst others, performed particularly well. The November auction in Johannesburg featured three seminal works by Alexis Preller that were snapped up by collectors. These works span the length of his career and show the chronological development of his visual iconography: Girl with Oriole (1948, sold R4 010 400, six times its pre-sale estimate), Grand Mapogga III (1957, sold R 4 678 800, three times its pre-sale estimate) and Anubis (65/67, sold R668 400). This diversification in the market gives us great stability and reflects positively on market trends. As stated by Michael Coulson: “The only eight-digit sales were again Irma Sterns, both attained in the first half of the year, but there are signs that the long-awaited broadening of the market is at last developing. We no longer find Stern and Pierneef contributing 50%-plus of a sale’s gross.” ³

Our database of collectors has grown, with up to 30% new buyers participating in our salerooms for each sale indicating the increasing number of South Africans that are taking the business of buying art very seriously. It is indeed gratifying to note that our Evening Sales which, feature important South African and International art, are always packed to capacity.

The highest price achieved this year was for Irma Stern’s Arab which, after fierce bidding, sold for an exhilarating R17 267 000, the second highest price ever achieved for a painting sold at auction in South Africa, following closely on Stern’s Two Arabs which sold for R21 166 000 at Strauss & Co’s June sale last year. In four years, Strauss & Co has sold nine of the ten most expensive paintings sold at auction in South Africa, including eight major works by Irma Stern and a landscape by JH Pierneef, for whom we still hold the world record. The highlight of our February 2013 auction, a compelling 1938 portrait, Malay Girl by Irma Stern, will no doubt take its place in the top ten line-up.

We were entrusted with a large number of important private collections and estates from collectors whose taste and vision attracted the interest of a wide audience. These included the Professor Walter Beck Collection of Glass, Japanese Cloisonné and Chinese ceramics, the Vivienne Linder Collection of Fine Jewellery, and Furniture, Paintings and Decorative Arts from a Collector. In all three cases the high results achieved far exceeded pre-sale expectations.

One of the highlights of 2012 was no doubt the sale of the contents of Keerweder, regarded as one of the finest Cape Dutch properties in the Franschhoek valley. The collection, comprising 662 lots of important Cape and Colonial furniture, paintings, silver, ceramics, metalware, carpets and garden statuary sold for a total of R9,5 million, with a sold rate of 83% by lot and 96% by value. These results indicate that historic pieces with good provenance, in particular of Cape, Colonial and Boer War origin, are highly sought after.

Despite the inclement weather which persisted throughout the preview and auction, collectors, neighbours, potential bidders, the curious, as well as art and history aficionados, poured into the warm and welcoming homestead by the hundred to admire its museum quality collection. Fierce bidding prevailed throughout all three sessions which took place in a packed marquee, with many lots selling way above their pre-sale estimates. Over 600 people attended this historic auction.

The core of the collection was formed by a large selection of Cape furniture which was snapped up by collectors, agents and decorators alike as were the many Chinese and Japanese ceramics. The highest price paid was for a highly important 18th century Cape armoire sporting silver escutcheons by celebrated Cape silversmith Johan Hendrik Vos, which sold for R891 200, followed by a Cape stinkwood bible desk which sold for R579 280. The top lot of the auction was JH Pierneef’s Kameeldoring, Kalahari which sold for R946 900.

An auction first: Ambassadorial introduction to Arab by Irma Stern

Arab by Irma Stern was the star lot of our June auction in Johannesburg which sold for almost three times its pre-sale estimate. Painted during the artist’s first visit to Zanzibar in 1939, it had been in the same family since it was purchased directly from the artist by the owner’s mother over 70 years ago.

The day before the sale, His Excellency Mr Khalid Ba’Omar, Ambassador of the Sultanate of Oman, spotted the image in theSunday Times. He identified the sitter as an Omani by his traditional dress. Zanzibar was still under the reign of an Omani Sultan – Seyyid Khalifa Bin Haroub in 1939 and before the auction started, he gave a brief introduction placing the sitter in his historical context.

Our paintings department, headed by Stephan Welz, features handpicked professionals whose knowledge and experience is difficult to match. They work in tandem to curate our sales around a rich variety of the highest quality works and the most coveted South African artists in order to serve our broad base of collectors in their quest to find the next iconic work. Their hard work and passion have attracted buyers from South Africa and abroad to our sales and have resulted in record prices and historic sales. Two respected and well known faces from the South African art scene, Phillippa Duncan and Ruarc Peffers joined the company in June as senior paintings specialists. They are based in the Johannesburg office and are both Michaelis BA Fine Art graduates and trained auctioneers. They bring with them a wealth of knowledge and expertise.

Strauss & Co hosted its traditional jewellery week for the third consecutive year with international jewellery guru and BBC Antiques Road Show jewellery expert, Joanna Hardy who educated, entertained and mesmerised our clients with her in depth knowledge of jewels. We also launched her bookCollect Contemporary Jewelry.

Wits Art Museum Strauss & Co is delighted to confirm its involvement with the Wits Art Museum’s auction of Contemporary Art which takes place on 30 May 2013. Proceeds will benefit the museum for future acquisitions and educational programmes. Should you wish to contribute works for sale, please call Lesley Spiro on 011 717 1357.

After three very happy years at the Woodmead Country Club Johannesburg, we have decided to move our sale venue to The Wanderers Club which is in the heart of Johannesburg, closer to our offices in Houghton and therefore more conveniently placed. We look forward to seeing you there for our inaugural sale which takes place on 20 May.

We await our February auction with great anticipation as it features, once again, an outstanding array of fine and decorative arts.

I wish our clients the very best for 2013 and thank you for your ongoing support. 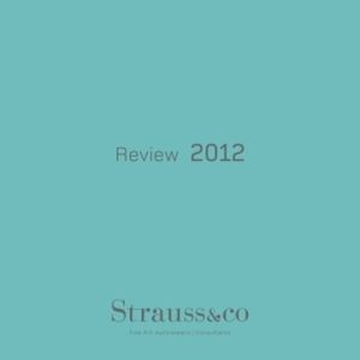