Our quest for good service and excellence has remained a daily commitment, which requires hard work and dedication on the part of our team headed by Stephan Welz. The result has been that 2010 has exceeded all expectations in terms of turnover, records achieved and the quality of consignments which we have had the privilege of handling. The total turnover for the year is R187 million. These results show an increase of 86% over the same period last year, our maiden year, reaffrming the strong demand for premier South African art with Strauss & Co’s assurance of quality and authenticity. Our market share remains the highest not only in South Africa, where we lead the market and have done so since our inception, but also worldwide, despite our lower commission rates and buyer’s premium. The latter is automatically added to the hammer-price when results are published in the media. Notwithstanding the unpredictable economic climate, these exceptional results reaffirm our place as the leading Fine art auction house specialising in South African art.

Irma Stern, one of South Africa’s most celebrated artists, has dominated our auctions the entire year with three of our four catalogue covers dedicated to masterpieces by her, and two major records established. We started the trend last year when we achieved our first record for an Irma Stern still life selling Magnolias in an Earthenware Pot for R7 200 million. This was followed by the highly successful sale of the captivating portrait of Carla. Six months later we achieved R7 480 million for Still Life with Gladioli and Fruit, again breaking a record. Undoubtedly the highlight of our year was the record price of R13 368 million paid for Gladioli in October, the highest price ever for any South African painting sold at auction in South Africa.

Our auctions were characterised by venues packed to capacity, alive with energy and competitive bidding. Highly important works from private consignors changed hands at auctions that all made history in one way or another. In addition to the familiar faces of our loyal clients, we saw a marked increase in new, active and competitive buyers bringing renewed confidence in a market which is now sustained by a growing number of players.

We look forward to a year in which we will endeavour to build on the successes of 2010.

I would like to take this opportunity to wish all our clients the very best for 2011 and to thank them for their continued support. 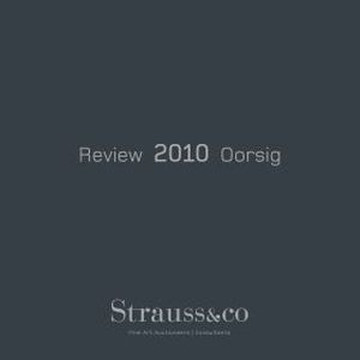