Dr Strauss and I are indeed overwhelmed at the outstanding achievements Strauss & Co. has accomplished in its first year of operation despite being the new kid on the block, the recession and a highly competitive local and international market. In one year, Strauss & Co. has become not only a name that speaks of extraordinary art, as well as unparalleled expertise and service, but is also by turnover the largest Fine Art Auction House in South Africa. Much of the success of our sales can be attributed to the long standing relationship and trust the directors and staff of Strauss & Co. have developed with collectors and dealers both in South Africa and abroad. We are grateful to our clients for their support during 2009, our inaugural year.

Our vision of encouraging connoisseurship and passion at the top end of the local art market, with emphasis very strongly on quality, service and excellence is proving to be a winning formula. This is due to ourformidable team of world class art auction specialists headed by the doyen of South African art auctioneers and experts, Stephan Welz.

Strauss & Co. hosted three sales in its first year of operation, two in Johannesburg and one in Cape Town, generating a turnover of over R100 million of mostly high end paintings establishing Strauss & Co. as market leader. Our market share is currently nearly double that of our nearest competitor. We set numerous new auction records for among others, Anton van Wouw, Irma Stern, Jean Welz, Wolf Kibel, Frans Oerder and Freida Lock, Cape furniture and Paul Storr silver. Particularly noticeable amongst these were:

After Stephan Welz’s sudden exit from the market in 2007 and subsequent 18-month trade restraint, there were no doubts in our minds that the South African art market had lost its leader and mentor. Being seasoned collectors and prompted by our passion for South African art, Dr Strauss and I approached Stephan with a view to form a new auction house. We set off on our course to create a sleek, solid and successful operation with Stephan and his formidable team as the key players in an attempt to give back to the market the credibility and expertise it had lost. Francis Antonie, our then Managing Director, and Mary-Jane Darroll were instrumental in laying the foundations. Strauss & Co. opened its head offi ce in Houghton, Johannesburg in September last year to be followed by the launch of the Cape Town operation in February 2009 and the opening of our Newlands premises in May.

Our elegant offices in prime locations represent our vision of top quality and excellence. Inspired by the marked move of International auction houses away from the traditional Victorian image, Mary-Jane Darroll has achieved a gallery-style minimalism that places the artworks centre stage with optimal hanging and lighting consideration.

In our pursuit of rarity and quality, Strauss & Co. was entrusted with the sale of several important works from private hands that were fresh to the market, either acquired directly from artists or their estates or that had been out of the public domain for years. These included Irma Stern’s Magnolias in an Earthenware Pot (sold R7 241 000, a world record for a still life by the artist), Carla (sold R5 570 000), Wolf Kibel’s arresting Self Portrait sold R1 225 400, a world record for the artist) and Jean Welz’s Still Life Cézannesque (sold R1 225 400, a world record for the artist). We handled the most important piece of Cape furniture ever to appear at auction, an 18th century Cape silver-mounted coromandel buffet, establishing a new record and a pair of 18th century wine coolers and liners, by master silversmith Paul Storr which sold for three times its pre sale estimate. The Leslie Milner Collection comprising some 42 South African paintings achieved excellent results due in part to our knowledge of the market and our exceptional marketing skills.

Strauss & Co. has done justice to several artists that have tended to be previously overshadowed achieving record prices for their work. These include amongst others Frans Oerder, Wolf Kibel, Dorothy Kay, May Hillhouse and Edoardo Villa. Although the works off ered were exceptional examples of the artists’ work, the fact that they were professionally presented to the market greatly enhanced their final selling price.

Stephan Welz has been joined in Cape Town by the key staff from his former company, Ann Palmer, Vanessa Phillips and Bina Genovese, all of whom have extensive experience and expertise in the auction world. Mica Curitz, silver specialist, has followed suit and recently Emma Bedford highly regarded in the art world both locally and internationally has also joined us. In Johannesburg Stephan is partnered by Mary-Jane Darroll who has considerable gallery and auction experience. Given this team I have no doubt that Strauss & Co. will in the future continue to play an important role in the South African art market serving the best interests of both sellers and buyers. 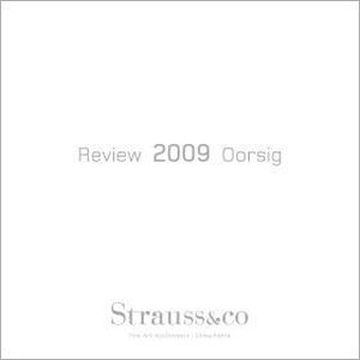