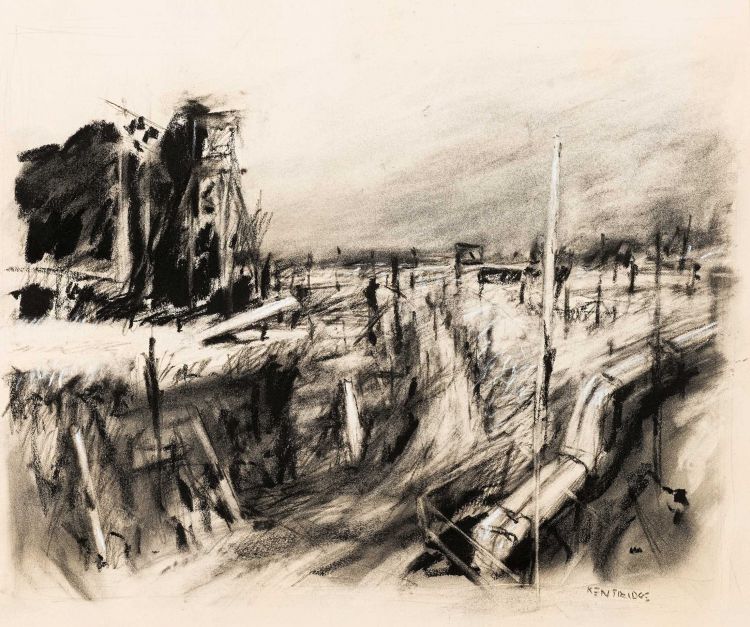 Having to come to terms with the Highveld landscape in and around Johannesburg, William Kentridge adopted the habit of driving out of the city for any arbitrary distance, say, 6.3 or 19.8 kilometres in the late-1980s, and drawing the scene in front of him. ‘Generally I ended up with a catalogue of civil engineering details,’ he relates. ‘It became clear that the variety of human intervention on the landscape was far greater than anything the land itself had to offer: the varieties of high-mast lighting, crash barriers, culverts and so on. The transitions from veld, to fence, to road, to field, are as great as any geological shifts anywhere.’ Added to this list, one can enumerate the headgear of an abandoned mine shaft, sluice pipes, and a set of railings as is clearly visible in the present lot of one of Kentridge’s typical Highveld scenes.

The history of the landscape is clearly evident in all these human manufactured structures. And despite his practice of erasing elements of the landscape when he produces his stop-frame animation films, it is impossible to negate the traces of a previous presence in this Kentridge landscape.

Writing about South Africa under apartheid in an essay titled ‘Landscape in a state of siege’ (1988), Kentridge points out that the Highveld landscape in which he grew up, especially the dreary winter landscapes with the burnt grass which renders everything in stark black and white, was very different from the Pierneef landscapes with which he was familiar. He says they seem to not contain any traces of the history of the land, although it would be foolish to deny the beauty of a Pierneef landscape.1 Kentridge recently renewed his interest in mining but added yet another layer of the history of place when he drew Highveld landscapes on double page sheets torn from old mining ledgers (Accounts and Drawings from Underground, 2015) which lays bare the political economic history of the land it financial detail. 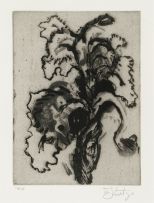 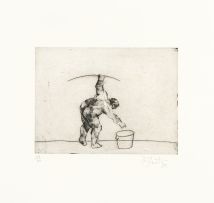 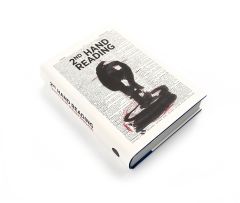 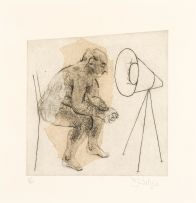