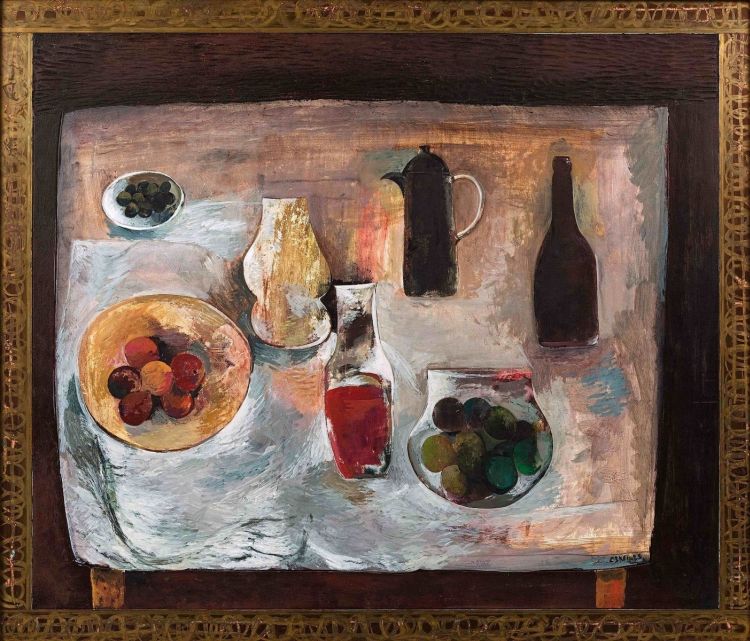 Still life paintings are far more than just conglomerations of objects. On the contrary, the choice of objects reveals much about the artists’ lifestyles, the cultural milieu in which they operate and the values of their time. In addition, with less pressure to produce a likeness, the artist is free to explore new material and new approaches to picture-making.

Still life with Fruit, Olives, Wine Bottle and Coffee Pot offers us the opportunity to consider how Cecil Skotnes shifted his artistic concerns in response to his relocation to Cape Town in 1978. In contrast to the linear, graphic quality of African-inspired iconography that he developed through his association with artists and cognoscenti in Johannesburg, the atmosphere of Cape Town produced a radical change in his style.

In an interview with Skotnes, art critic, Neville Dubow maintained “You have rediscovered yourself as a painter in your Cape Town years” and went on to assert “there is an optimism in the work, a rediscovered certainty of touch. The simple joy – not a term one has call to use all that often – in the act of painting seems to have resurfaced. And that is reflected in the way the surfaces glow in their colour and tonal range."1

To the critic’s question of whether the quality of the Cape light had something to do with this shift, the artist offered a resounding “yes”. Not only are his Cape still lifes infused with light and colour but they are imbued with an almost Klee-like whimsy and good humour. It is interesting to note that Skotnes trained originally as a painter at the University of the Witwatersrand under Douglas Portway, amongst others. Comparisons can be made between their poetic restructuring of observed reality to achieve a painterly lyricism.

In this gorgeous still life we sense the artist’s rediscovered delight in paint as well as his palpable pleasures in the joys of life. The current owner is a chef at whose seaside home the Skotnes family often enjoyed a meal that always included a visit to the wine cellar. On one such occasion in the mid-1980s the artist remarked that the wall needed a painting. The offer was accepted, the painting produced and delivered and the deal cemented with many more bottles of wine. The painting’s subject, therefore, comes as no surprise.
1. Dubow, N. (1996) In Harmsen, Frieda. Cecil Skotnes. Pretoria: self-published. Pages 115-116.

Purchased directly from the artist by the current owner 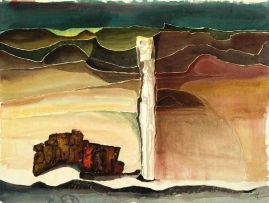 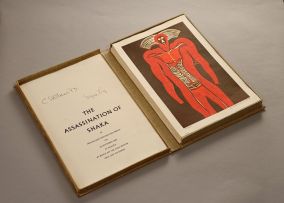 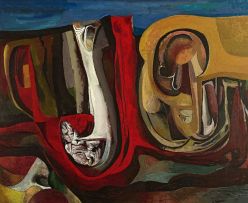 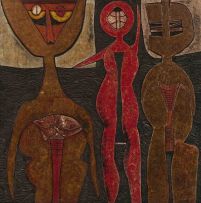 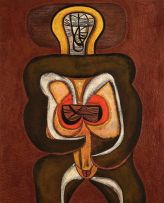 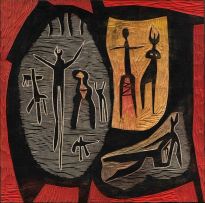