Derek Leigh studied under the British modernist Jack Heath at the University of Natal in Pietermaritzburg between 1959 and 1962. His rounded training there was characterised by a strict emphasis on drawing, design, sound technique and art history. Later, in Paris, with his sister Valerie and his soon-to-be-wife, Leonora Everard Haden (daughter of Ruth Everard Haden), he fell under the sway of André Lhôte, as did so many other talented, impressionable young artists. It comes as little surprise then that his developing style, particularly in its approach to the landscape, borrowed from Lhôte’s tonal key, formal solidity, and Fauvist colour palette. After a stint teaching art at Luanshya High School in Zambia in 1966, Leigh spent a year painting at Bonnefoi, his wife’s now famous family farm in the then Eastern Transvaal. While already committed to a gently geometric and bright brand of neo-impressionism, his work at Bonnefoi could not have escaped the influence of Bertha Everard and Edith King, while he might also have found in Ruth Everard Haden’s sinuous horizon lines, quilted landscapes and rich, ravishing colour combinations a beautiful, convincing template. Leigh became a senior lecturer at the University of KwaZulu-Natal (Pietermaritzburg) in the Fine Art and History of Art Department where he taught for 23 years. 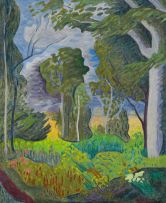 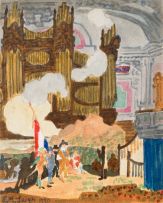